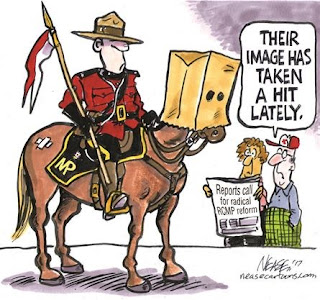 I have two questions: 1) Does Bill Tieleman even live in Surrey?

2) Is Bill Tieleman's advocacy work for the Save the RCMP Sleazebags a paid postion?

Bill Tieleman is president of West Star Communications, a strategy and communications consulting firm, providing services for labour, business, non-profits and governments for the past 13 years. So I wanna know. Is his advocacy for the Save the RCMP sleazebags a paid position?

Michael Palmer from White Rock referred to Bill Tieleman as a lobbyist for the national police federation. They are the sleazebags running the paid ads trying to prevent Surrey from forming a municipal police force. The bogus petition is run by the father of an RCMP officer.

I already pointed out the obscene conflict of interest the RCMP have partaken in by charging the mayor instead of the people who were harassing him at a local grocery store. This dirty deed is further evidence that the RCMP in Surrey need to be replaced ASAP.

You want a provincial referendum on keeping the RCMP in Surrey? F*ck off. No really. Why not make it a federal referendum for f*ck's sake? It's nobody else's business what we do except for us. Surrey decides it's future no one else. Especially paid sleazebags from a dirty union.

Doug McCallum won the election on a promise to replace the RCMP. Surrey is the largest city in the country without its own police force. I live here and I am not paid by Doug McCallum to promote his position. I am a voter who voted for him because I supported his positions. LRT on 104th would have been an infrastructure nightmare. It was a bad idea. Doug McCallum saved us from making that horrific mistake. Now the sleazebags are criminally harassing him.

Surrey First was Surrey's worst when it came to fiscal reasonability and crime prevention . All they do is tax and spend. We want something better. This is our home. We live here. We decide.

Recently Post Media Trash was discussing the idea of getting rid of the RCMP in BC entirely and forming a Provincial police force like Ontario. That is what Alberta is now considering. If you have a provincial referendum, then that's the question. Whether to form a provincial police force for all of BC. Yet Surrey decides its own fate. No other City has a say in Surrey's future.

Why Alberta is considering severing ties with the RCMP

Surrey's Municipal police force already have boots on the ground.