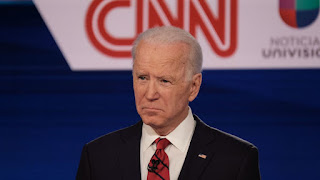 We all know that of all the mainstream media outlets, CNN is the most ridiculous. I see Canadian men in Surrey wear T-Shirts that say CNN: Fake News Network. Yet what I find both ironic and suspicious is the fact that they have turned on their puppet king Joe Biden and I attribute it to the US withdrawal in Afghanistan. They're not fact checking him on the pharma fraud.

The article is of no relevance whatsoever other than the fact that they have turned on him. Tulsi Gabbard, the vocal opponent to the Democrats war machine was surprisingly opposed to the US withdrawal in Afghanistan. She is credible and respected. However, I do agree with Joe Biden on the withdrawal from Afghanistan. That prolonged occupation had nothing to do with 9/11.

When Biden first took office CNN was bragging about how many executive orders he signed right away. He didn't think those up himself. Someone had a stack of orders for him to sign and he signed them. Is it possible the US withdrawal from Afghanistan was actually his idea? Image that.

I know I should just keep my mouth shut because getting rid of Joe Biden is in everyone's best interest but his successor should not be given a blank cheque. Power corrupts and absolute power corrupts absolutely. That is why the checks and balances were drafted into the Constitution. To keep governments accountable to the people who elect them.