This is just so wrong. Alec Baldwin's denial is out of control. He needs to have a sit down with Dr Phil and talk about personal responsibility. Cinema Blend is reporting that "Alec Baldwin Responds To George Clooney's Comments About Gun Safety On Sets." That reeks of a political disinformation campaign in the court of public opinion. This is what George Clooney said:

He mentioned he knew actors who have died from firearm accidents on set and referred to Brandon Lee. He said because of those accidents, he always checks the gun himself. Like everyone is trained to do. Alec responds to him publically and says mind your own business. Maybe checking the gun every time works for you. I had a different protocol and it works for me. Evidently not. Telling anyone that they should not check the firearm themselves when handed a gun is completely irresponsible. All we see from Alec Baldwin is denial and zero accountability.

George Clooney also said "And maybe they weren’t even using that gun for target practice, but they had live ammo with dummies in her pack. And that is insane. It’s infuriating."

He said that because some claimed they were using the guns for target practice between scenes which totally falls within the realm of believability. Alec Baldwin denied that. I think he's lying again because he refuses to accept responsibility for his mistakes.

Alec Baldwin obviously wasn't using the guns for target practice because he hates guns and knows nothing about them. No doubt other people on set were. George Clooney also made reference to low budget films hiring inexperienced armourers.

Alec Baldwin recently said he would never point a gun at someone and pull the trigger yet that's exactly what he did. Obviously it was an accident. The reason people are taught to keep their finger off the trigger is to avoid an accidental discharge.

Alec Baldwin is trying to blame the gun. He's telling all his brain dead liberal friends that evil gun just jumped out of his holster and shot someone dead. I didn't point the gun at anyone, the gun did. It was in his hand when it went off. It's not physically possible to accidentally shoot someone unless he was pointing the gun at them unintentionally. Alec Baldwin lies about the fatal shooting. 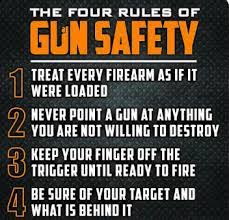