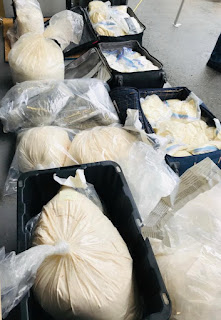 The Indo Canadian Voice is reoitng that "On October 28, 2020, Richmond RCMP Organized Crime Unit executed multiple search warrants at locations suspected to be clandestine labs. Six individuals were arrested during the execution of the warrants. The Public Prosecution Service of Canada has now charged all six."

Police seized 28 kg of methamphetamine, 8.5 kg of fentanyl, 2.5 kg of fentanyl/heroin mix, 1 kg MDMA, 10 kg of illicit cannabis and 58 kg of ephedrine along with 3 pistols and 5 carbine-style rifles. First of all, there's no such thing as illicit cannabis. Pot is legal now. The intent of legalization was to stop wasting our time with pot busts. Nevertheless, the rest of the drugs seized were very significant. The question we need to ask is why did it take over a year before charges were laid? As always, something fishy is gong on.