Ukraine: another look at the other side

We know that the mainstream media lies about everything. We know that the democratically elected president of the Ukraine who was supportive of Russia went into exile after a coup.

We know that the war in Syria had nothing to do with ISIS. It was a war against a president who was supportive of the Russian pipeline from Iran as opposed to the Transnationals pipeline from Qatar who fund ISIS. We know that the Transnational president of the Ukraine dammed the North Crimean Canal seven years ago, cutting off the source of nearly 90% of the region’s fresh water.

NATO wants to put nuclear missiles in Ukraine. That is what started the Cuban Missile crisis.

The #Azov Battalion of #Ukraine supported by #NATO & the #US since 2014 pic.twitter.com/cn6kPAvJbk 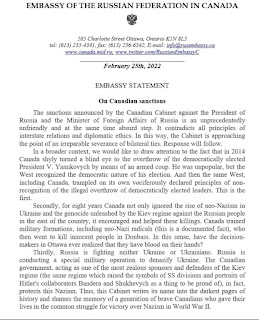