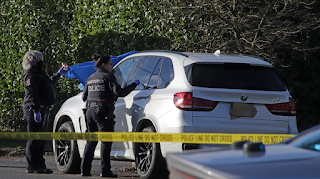 The VPD is reporting that "Vancouver Police are investigating the murder of two women who were shot dead in a vehicle on the city’s west-side. Investigators from VPD’s Homicide Unit spent Sunday collecting evidence from the crime scene, near West 8th Avenue and Discovery Street, after the bodies were discovered just after 8 a.m. Sunday by a neighbourhood resident out for a walk. The victims have been identified as Shu-Min Wu, 50, and Ying Ying Sun, 39."
Posted by Dennis Watson at 8:04 AM