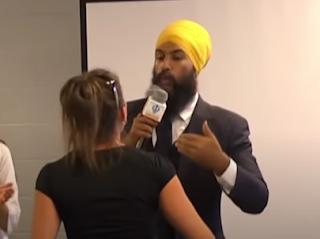 Jagmeet Singh's offensive lie has caused us to revisit his staged event during the election. Jagmeet said this convoy represents white supremacy and supporting it means supporting people who would bomb a Muslim Mosque. As I previously said, that is an offensive lie.

I support the convoy and I am not racist. Yet he is calling me a racist white supremacist and claims that I support bombing Muslim Mosques. That is completely false and very offensive. It is divisive and makes me angry. There are three families of Syrian refugees in my complex who I get along very well with. Yet he says I am a racist and would bomb their mosque. Jagmeet is hateful. Jagmeet is racist. This brings us to his staged event during the election.

During the election there was a widely distributed video of how he handled a heckler. We thought it was suspicious at the time, yet we admired the way he handled it. Well let's revisit that. Not only was it staged, it was a broken campaign promise.

During his campaign he had a heckler that got up in his grill. He kept saying you are welcome here. We will meet your hate with love. OK now let's fast forward that to the Truckers Convoy. Jagmeet lied and said the Truckers are hateful racists. Yet his campaign promise was to say they are welcome here and meet their hate with love. Has he done that? Not at all. He has met their sincere concerns with hate and defamation. He certainly hasn't said they are welcome here. He lied. He made a campaign promise that he broke.

He is calling me a racist white supremacist for supporting the Convoy. That is a hateful lie. His own brother in law donated to the Convoy. So now he's calling his own brother in law a racist white supremacist that would bomb a mosque. That is false and really offensive. Where I work we rely on many truckers ever day. I work in shipping and receiving. The majority of those truckers are Indo Canadian. Jagmeet is saying all those Indo Canadians who are in the convoy or are supporting the Convoy are racist white supremacists that would bomb a Mosque. We need to stop those kind of hateful statements and we need to stop electing hateful politicians like Justin Trudeau and Jagmeet Singh. Fool me once, shame on you. Fool me twice, shame on me.