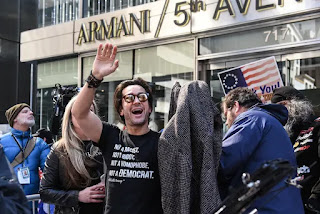 OK I haven't heard from Brandon yet but he did mention in his email forum that his sentencing was today so I had a peak at what the fake news had to say. Buzz Feed News is reporting that "Conservative influencer Brandon Straka was sentenced on Monday to three years of probation after he admitted to enthusiastically joining and encouraging the pro-Trump mob that stormed the US Capitol just over a year ago." January 6th insurrection. What an absolute joke. The fake news is ridiculous. For over a year the fake news was condoning and encouraging the ongoing violence at the ANTIFA riots. They should have been charged for that.

We all know that the January 6th protest was a complete set up. Dan Dicks posted videos of police opening the barricades and waving the protesters in. We all saw videos of protesters being let into the Capital Building. The few that did anything unruly were discovered to be plants from ANTIFA. The way the media has consistently misrepresented what happened that day is absolutely ridiculous, Kinda like how they completely misrepresented the protest in Washington yesterday. If you watch the videos you can see what happened for yourself.

I just want to say that Brandon Straka is a really good guy. I admire him and I respect him. I love the T-Shirt he's wearing in that picture. It says Not a Racist. Not a Bigot. Not a Homophobe. Not a DEMOCRAT. His heartfelt testimony of why he left the Democrat party has inspired millions. Now that this nonsense is behind us we can all move forward together. Let's Go Brandon.

Capitol police open doors for the protestors. They stand aside and invite them inside. pic.twitter.com/OnSd3KGzz5