In Defense of Rebel News 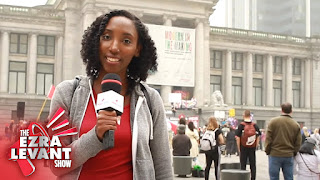 Yesterday I was browsing through some articles and I came across a ridiculous campaign of hate perpetrated by a leftist lobbyist group against Rebel Media. It was a successful campaign that got Rebel News banned from PayPal. This brings us to Drea Humphrey and Ezra Levant.

I first met Drea in Surrey when she was an independent media outlet covering the lockdown protests. Then I learned about Candace Owens, Leslyn Lewis, Rob Smith, Melissa Tate and the Hodge Twins. An army of Black conservatives who are champions of justice. I was like wow, these people are going to save the planet. Drea told me she had the opportunity to work for Rebel News and she asked me what I thought about it. I thought about it and smiled. I said well, I've heard some things and you can't believe everything you hear. She agreed.

Then I said they did endorse Leslyn Lewis. I think it would be good for you and it would be good for them. Drea kept getting kicked off youtube and Facebook like everyone else for expressing conservative views. That was when she was with Hungry for Truth. I said having a big outlet behind you will give you a bigger audience and it certainly has. Her videos get way more views now. I said it would also help Rebel deal with their defamation.

The leftist extremists say all conservatives are racist. That is a hateful lie. Candace Owens posted a funny coming out video where she did a skit telling her parents she was Gay and Conservative. They were fine with her being Gay but freaked out about her being Conservative. Her mother exclaimed how can we tell our friends our daughter has joined the KKK? It was a joke but it illustrated the absurdity of the leftist defamation against Rebel News and conservatives.

Leftist extremists also claim Conservatives are Fascists which is another hateful lie. Ezra Levant is Jewish. Calling him Fascist is ridiculous. Brandon Straka is a Gay Conservative who launched the Walk Away Movement. People leaving the Democrats because of the leftist hate.

This is why I redrew the political line. I took the normal horizontal line and turned it vertical showing how Communism and Fascism are the same thing. Conservatives believe in less government, more freedom and less taxes. There is nothing hateful or controversial about that. When we see the persistent lies in the mainstream media it is time for us to put our money where our mouth is and financially support Rebel News.

Posted by Dennis Watson at 5:54 AM