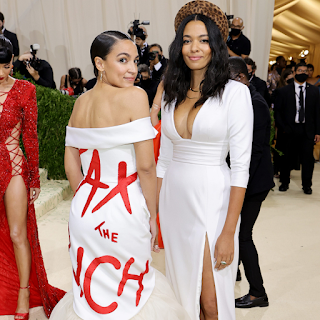 Now that we've established that Anastasia Lin is a genuine human rights advocate and social justice hero, let's compare her with AOC who Curtis Sliwa refers to as All Out Crazy.

Anastasia Lin confronts the atrocities of Communism at great personal risk. She has exposed the ongoing torture of political prisoners and their execution for organ harvesting. Likewise, Yeonmi Park has revealed the human trafficking that currently exists in Communist China under Xi Jinping. AOC wants to bring that here because she is a liar, hypocrite and walking contradiction.

AOC is a rich yuppie who went to an extravagant gala wearing an expensive dress that said tax the rich. None of the self aboved celebrities at that event have any desire to share their wealth. They just want to bathe in the popularity and praise of fake woke lies.

Here in North America the Uyghurs, the Tibetens, the Falun Gong and the Hong Kongers are all denouncing the atrocities of Communism while rich yuppies like AOC want to bring those deplorable acts here shrouded by a veil of lies.

When people rightfully expressed concerns about AOC’s hypocrisy at the gala, she claimed that the criticism is an example of American culture being “deeply disdainful and unsupportive of women, especially women of color and working class women.” WTF? That had absolutely nothing to do with it. How does AOC feel about unvaccinated women of colour? Do those lives matter?

Then when AOC was caught escaping the New York lockdown in Florida partying maskless, she went on a bizarre rant claiming those criticisms were from right wing extremists who wanted to sleep with her. That was batsh*t crazy. AOC is a vile human being who opposes the Hispanic values of faith, family and freedom. She is a walking contradiction caught up in a web of lies.

Posted by Dennis Watson at 4:20 AM