Shootings in Coquitlam, Langley, Burnaby, Abbotsford, and a fatal shooting in Surrey 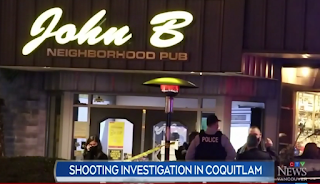 TriCity News is reporting that “A man is in hospital in serious condition after a shooting in Coquitlam Friday evening. Before 9:30 p.m., the victim was found with gunshot wounds in the parking lot next to the John B neighbourhood pub and liquor store — located in the 1000 block of Austin Avenue.” CTV is reporting that the victim was known to the police.

In addition to the fatal shooting in Walnut Grove on January 8th, CTV is also reporting there was another shooting at or near the Good Knight Inn on 200 Street in Langley January 11th. He was shot in the leg and was known to the police. Sounds like he owed money.

"The Langley shooting was reported just hours after police in Burnaby responded to a targeted incident in that city. Also in the Lower Mainland, a targeted shooting is under investigation in Abbotsford. The victim in that case is also in his 40s, and believed to have been targeted by his shooter during a fight at an apartment building. And on Sunday, homicide investigators were in Surrey for another incident – this time fatal."

The Surrey Now Leader is reporting that “The Integrated Homicide Investigation Team has identified the victim in a shooting in Surrey on Jan. 9. Brian Chapman, 62, was found dead inside a house in the 13500-block of 85 Avenue on Sunday. Chapman is known to police, but there has been no police history since 2010.”

If you hear of a shooting, feel free to email me or post a link in the comments. Now that I got rid of hotmail and Postmedia news, sometimes I miss some of the local shootings. Cheers.