Fatal shooting in Langley on the 1st anniversary of Mo 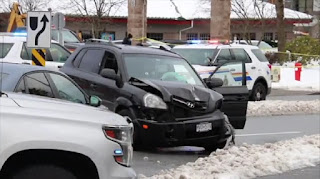 Update: The victim is 18-year-old Julian Moya Cardenas. My condolences to the family.

Oh yeah, gang violence. The Langley Advance Times is reporting that "One person is dead after a shooting at a busy Walnut Grove intersection Friday afternoon. The regional Integrated Homicide Investigation Team said it appears to be a targeted attack."

"According to witnesses, a car speeding west on 88th collided with another vehicle at the intersection of 202nd Street. The driver of the westbound vehicle got out and ran through a nearby parking lot, but someone from a pursuing vehicle got out, chased him on foot, and shot him. The shooter or shooters then fled the scene in their vehicle, heading west on 88th Avenue."

"A bullet hole was visible in the windshield of one of the crashed cars. RCMP and other first responders were on scene. A body covered by a yellow tarp was visible behind the Subway restaurant." Larry Amero went to Walnut Grove high school. It is suburbia.

One of Larry Amero's drug dealers in Montreal named Jeremy Bettan was shot dead in Walnut Grove on Boxing Day back in 2011. It was implied that Jeremy was a co owner in that ridiculous boat Steroids and Silicone. Theirs is a Barbie world so it is. Mine is not.

This fatal shooting comes on the one year anniversary of Mo aka Anees Mohammed's fatal shooting who ran the DTES for a number of years. He stood up to 81 who was his long time supplier. Days later he was killed. A few more of his associates have been murdered since. The Brother's Keepers claimed responsibility at the time but are now trying to blame the Driftwood Crips. Both of whom work for the Edmonton Hells Angels. After they closed Panchos down in Surrey they gave the Wolf Pack the DTES and Edmonton got Surrey. Mo said no so they capped him just like they did Ali for the same reason. He said no to the Edmonton HAs.

Guess who they put in charge after they shot Mo - Damion Ryan. AYFKM? No wonder they capped Mo. Mo would have told that clown to F*Ck off. This is why the Red and White use mental rejects. They could never make it on their own without the club. How can Damion Ryan run the DTES for the Cub pack and be in the Witness Protection Program at the same time? The CFSEU is dirty as F*ck for embracing him. GMAFB Most wanted my a*s. They know exaclty where he is.

They roll on the people they hire so they can profit from the murder. God damn you all. 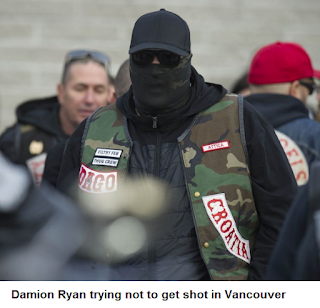