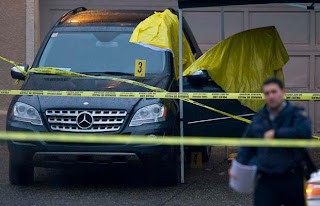 The Integrated Homicide Investigation Team released the names of the two latest murder victims. The 28-year-old Surrey man gunned down Tuesday is Apollo-Lyn Simpson. His family agreed with police that releasing his name might help the investigation. He has no criminal record, but was a problem tenant, according to his landlady.

And the 38-year-old man gunned down execution-style in the driveway of his Walnut Grove rental house has been identified as Jeremy Olivier Bettan. Bettan also has no criminal record, but [Kim Bolan] has learned he did in fact have some associations within organized crime.

One blog reader just pointed out that when I made my post about the boat Jonathon Bacon and Larry Amero were racing around on the day before they were shot was called Steroids and Silicone. Kind of a plastic world if you ask me. Nevertheless, one commenter said Jonathon didn't own the boat, Larry Amero and Jeremy did. I would certainly be a coincidence if the Jeremy Bettan who was recently shot was an associate of Larry Amero. I am told by someone who went to High School with Larry Amero that he went to Walnut Grove High Secondary and was picked on in school. I guess that's why he turned to the steroids. They claimed his father was a longshoreman which was the HA contact.

Update: Other sources claim Jeremy Bettan was originally from Langley and went to Montreal to set up a courier company there. Yet another source claims Jeremy Bettan "worked" for Larry Amero. That doesn't confirm joint ownership in the boat Steroids and Silicone but it does confirm a connection to Larry Amero and the Hells Angels.