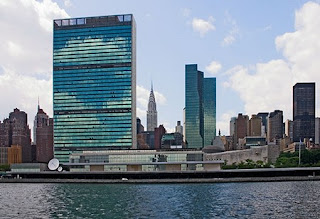 A bag containing 16kg (35.5lb) of cocaine was found at the United Nations headquarters in New York last week, police have said. The drugs were in a bag printed with a version of the UN symbol which arrived at the organisation's mailroom, setting off a security alert. Spokesman Paul Browne said they seemed to have been delivered by accident. There was no name or address on the shipment sent from Mexico City through Cincinnati, he added.

I’m wondering how it went missing and ended up at the UN Headquarters in New York. It’s not like someone puts UN on a package and drops it in the US Postal service and they deliver it to the wrong UN by mistake. The people moving the product are supposed to know where it’s supposed to be delivered to. It makes me wonder if the UN’s enemies had anything to do with the shipment going missing.