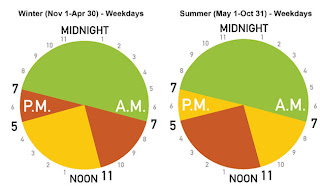 Another blog reader pointed out that the main reason they are tying to implement the Smart Meters is to change the daytime usage billing. They want to keep track of when you use your power and charge you more for using power during the day. They are doing it under the guise of being green trying to give people incentive for using power off peak times when really it's just an excuse to raise the daytime usage rates. The wireless transmission of your in home surveillance that can be intercepted by any criminal is just a side effect of their scam.