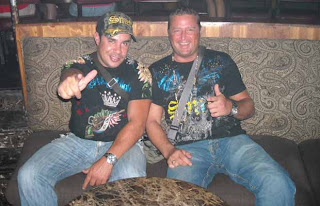 Without diving too much into the details of each case, I just want to cite the drug related murders of four Canadians in Mexico which I feel are very much related. Most recently we have a senior UN member murdered in Mexico named Salih Abdulaziz Sahbaz. He was 37 and returned regularly to Surrey.

Gord and Jeff didn't look like Hells Angel associates. They looked like two fun loving Canadians who got in over their head. They were making drug connections for the Hells angels in Mexico and were dealing with the Mexican cartels. The local news ran photos of their dead bodies in the paper. It was horrible.

We all know when someone gets shot, they bleed. We see people get shot on TV all the time. Seeing the recent photo of Salih's dead body reminded me of the photos of Gord and Jeff's. There was a huge amount of blood. I'm not the type of guy to print those kinds of pictures.

Some would argue that showing these pictures of the brutally murdered gang members is a good poster for kids so they don't get involved in that lifestyle. I understand the argument. I'm just not going to participate in it. I prefer to remember Gord and Jeff as the fun loving Bob and Doug Mackenzie types who were obviously fun, kind and friendly. To me that is just as significant because it shows how easily anyone can get tempted by the quick cash that comes at far too great a price. That is a real tragedy.