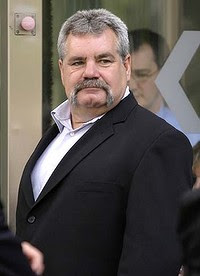 Five Australian men have been arrested after trying to smuggle $8 million worth of drugs Down Under from Vancouver International Airport.

On Dec. 30, 2011, Canadian border officers found the drugs - six kilograms of cocaine, 12 kg of MDMA (ecstasy) and nearly two kilograms of meth – after they examined a commercial oven and range destined for Australia Service Agency.

The shipment was tracked to Sydney airport on Jan. 7, and on Thursday to locations in two suburbs north of Sydney, where eight search warrants were issued and the five men arrested.

Dare I say it? We know who would be in charge of that much cocaine and crystal meth in Vancouver. Perhaps the fake ecstasy would start causing more fatalities in Australia just like they have here in greater Vancouver and Calgary. The same drug ring going international.

We know a little bit about the Hells angels invasion of the Australian drug market including Sydney. The hells angels bribed and patched over Chris Hudson. They told the local MC called the Finks to work for them or leave town. They told the Hells Angels to F off. We know that Chris Hudson was caught on video grabbing a girl by the hair and dragging her outside a nightclub. He was seen throwing her to the ground and kicking her in the head. Later that day he was seen assaulting his girlfriend in public. When a local lawyer and a Dutch backpacker came to his girlfriend's aid he pulled out a gun and shot all three emptying the clip into the lawyer who was a father of three while he lay on the ground wounded. That father died.

We also know all about the Senior Hells Angels and his pack of rats that were accused of gang raping and torturing a stripper from Melbourne on another pig farm. The woman was awarded a token compensation for her injuries but the assailants walked. We also know about the Sergeant at Arms for that chapter that was accused of gang raping and torturing that girl. The police seized some of his property under proceeds of crime legislation. He sued them and won. Now that's a rat king for ya. The president of the chapter had drug charges as well. Doesn't take a brain surgeon to do the math. The Hells Angels tried to extort almost $1 million from one of Australia's biggest construction companies during a dispute featuring Melbourne underworld bosses.

Interesting to see the huge difference between the Canadian and the Australian judicial system. The paper claimed that the mules who were caught bringing the drugs into Australia, could face life imprisonment. No house arrest from an idiot like Peter Leask down under.

Posted by Dennis Watson at 1:41 PM