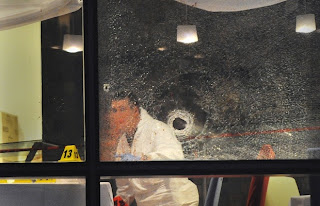 A man was shot dead at the Vancouver Sheraton Wall Centre last night while eating at a restaurant. My first impression that was out of the norm. Not the typical Surrey drug dealer getting shot dead for selling drugs in the Hells Angels area. Yet it turns out the victim was a well-known gangster named Sandip “Dip” Duhre. He would be part of the Duhre clan. The ones who are warring with the Hells Angels. Only it doesn't really look like a war. It just looks like the are getting exterminated by the Hells Angels.

Kash Heed had some interesting things to say about Sandip Duhre. Kim Bolan reported on a “chance meeting” Kash had with him in a restaurant. “Chance meeting?” That sounds awfully suspicious to me. Sure it happens. The Gang Task force had a chance meeting with several gangsters outside of various nightclubs. It’s just that when a politician has dinner with a gangster it’s hard to develop trust and confidence in that politician.