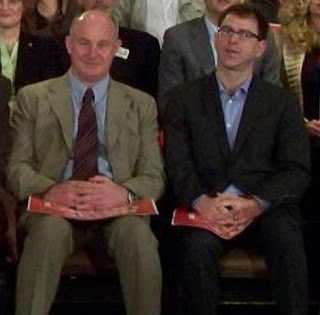 Adrian Dix is a promising investment. The Christy Clark / Gordon Campbell government makes me sick. These attack ads simply show how desperate they are about their drop in popularity. Interesting that their attack adds don't mention anything about her involvement in BC Rail. Face it. Gordon Campbell left office with the lowest approval rating in the Country. Even the Christy Crunch spin doctors can’t hide the fact that she’s just another Kim Campbell hiding the mess our own Brian Mulroney left us.

The same old bullshit day in and day out. The 1990’s was a federal and world wide recession. You can’t blame that on Adrian Dix. “They” keep saying the NDP will raise taxes and increase spending. Well the Campbell / Clark government did a fine job at that. The HST was a raise in taxes. The gas taxes were a raise in taxes.

I would vote for Adrian Dix way before I would ever vote for Christy Clark and that Sith Lord smile that giggled as she told the Vancouver Mayor and the Vancouver police chief there would be no funding for extra police during the Stanley cup Riot. My second choice would be John Cummings because a traditional conservative is a lot better than a neo con.

I think we should spend money on schools and hospitals. I think we should protect pensions and seniors. The Campbell government lining their own pockets at the expense of seniors and the mentally challenged was a shameful disgrace. I’d vote for John Cummings first except for the fact that I don’t think BC Hydro should be a private for profit corporation that isn’t accountable to the public. The privatized subsidiaries of BC Hydro have created this huge out of control fraudulent debt that is much worse than any NDP government has ever dreamed of.

I’m really offended by the same old nonsense. The NDP will tax and spend and the sky will fall if we vote NDP. Bullshit. The sky has already fallen. We need to fix the BC Hydro fraudulent debt now by making it publicly accountable not by turning it into another Enron scam at the taxpayers’ expense.

I support Adrian Dix. He’s a hard worker not a drunken pig. He cares about crime in the community. The Campbell / Clark government has turned their backs on crime if not been active participants in it. Mike Farnsworth would be an amazing Attorney General. This would be a wonderful step forward for British Columbia. Listening to the same old neo cons will drive this province right into the toilet of our own Enron tsunami.

Posted by Dennis Watson at 2:59 PM