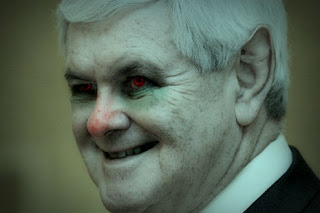 I realize with all the bullets flying and bodies dropping in the gang war revisited, no one really cares about American politics right now but since it’s in the news I’ll throw it out there and the rest of you can just scroll past it.

Turns out that Mitt Romney didn’t win Iowa after all, Newt Gingrich did. But wait a minute. They announced that Mitt Romney won Iowa. Now they claim the Newt won Iowa? That sounds an awful lot like Florida discrepancies to me.

I find Newt Gingrich’s popularity to be very disturbing. New developments came out about his past infidelities. A reporter asked him about it and he yelled at the reporter and said he was outraged they would even ask the question while his clone soldier groupies cheered and rose to give him a standing ovation. That was just plain cult like. Jim Jones here we come.

It’s a sad day when the “religious right” chooses infidelity over common sense. Gingrich’s infidelity is relevant. So is his ties to insider trading. Catherine Austin Fitts talked about the Shadow Government. An intelligent credible person talking about very real concerns. Ron Paul isn’t part of the shadow government. The Shadow government would rather elect two idiots (Sarah Palin or Donald Trump) instead of electing him.

Yet even the public can’t stomach that much stupidity so they found a healthy compromise in Mitt Romney. But no, the dirty traders and insider greed rather someone dirty enough to do whatever they want so they have to push someone else. So they pick the rageaholic with a history of infidelity and insider trading that would serve them well.

So many sheep have lost sight of that because they covet greed and idolize infidelity. When Desperate Housewives become the national role model, something has seriously gone astray. Muslims aren’t the only ones who have the term infidel. The New Testament claims that anyone who doesn’t provide for his own is worse than an infidel. It’s sad to see the American dream become twisted to the Infidel’s Dream to the cheers of the cult like crowd. 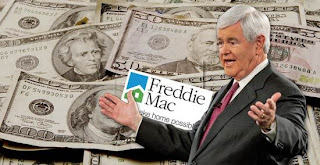 Posted by Dennis Watson at 9:03 PM