Israel: Are you listening? 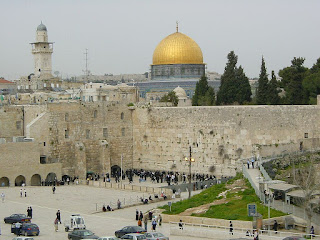 Strange story in the paper about a female Israeli soldier who was verbally abused by an ultra Orthodox Jew for not sitting at the back of the bus. There was a large demonstration of other Jews opposing it. Religious extremism and hypocrisy is indeed annoying and discouraging, yet it is nothing new. People will distort and exploit anything they want. That doesn't make it right.

Clearly any religion with anything to aspire to will elevate women not verbally abuse them. The guy should be giving up his seat for the woman not ordering her around and calling her names. In some minds chivalry is lost. I most certainly don't support any kind of Antisemitism many want to rekindle. We fought in the trenches on foreign soil to oppose that. Yet Israel is not always right and this man most certainly does not represent Israel. He is an extremist.

Israel is not always right. They would not have been slaves in Egypt or carried away captive in Babylon if they were. Yet Jesus was a Jew. The Bible was written by Jews. Do the Gentiles thank the Jews for that sacrifice? Religious extremism and hypocrisy is the very thing that Christ boldly confronted. He physically drove the money changers out of the Temple and called the religious leaders of the time liars, hypocrites and extortionists. He even went so far as to call them children of the devil warning that God is able to turn these stones into children of Abraham.

The Jews have a right to a home. So do the Palestinians. They are both children of Abraham who was also called Israel. I am somewhat baffled by some lobbyists that publicly denounce Zionism. Zion is the pure in heart. Zionism is a quest for a better world. Opposing that is rather silly. Zionism is not evicting people out of their home and taking over that home with force.

Israel's problem is that it is a nation without a constitution guaranteeing religious freedom and equal protection of the law. Instead of creating a free republic, they created a Jewish State. What on earth is that? Palestinians cannot have citizenship. They cannot have a passport or serve in the military. It is problematic.

The real problem is that neither side wants to share the land despite the clear command to vex not the stranger that sojourneth with thee. Take Gaza. Gaza firing rockets into Israel after Israel pulled out and gave them autonomy was crazy. Israel responding by shelling Gaza with White Phosphorous they bought from the Americans was over the top. The Palestinians in Gaza weren't the original inhabitants by the way. It's not like the native First Nations people here in Canada. The Philistines were the original inhabitants of Gaza. They were conquered by Ramses.

Surely I digress. I worked on a kibbutz in Israel when I was young. Israel is a wonderful place but it's full of crazies. Yes there are many wonderful people there from both sides who sincerely want peace. Yet there are wackos on both sides who are simply crazy.

I remember local trade Unions in Canada speaking out condemning Israel for building a wall protecting them from Palestinians who were firing rockets at them. I said you've got to be kidding. If my neighbor was firing rockets at me, I'd build a wall to defend myself too. It's a lot easier to criticize from the outside.

The real model for Israel is Neve Shalom Wahat al Salam - the Oasis of Peace. It is a community where Jews and Palestinians live in peace based on religious freedom. They aren't trying to water down and merge the different religious traditions into one. They simply say you're a Jew, you're a Muslim and you're a Christian and that's OK. That is a free republic. That is the model we should aspire to. There's a lot more I have to say about Israel but I'll save it for another time. Suffice it to say that Israel has gangsters too. Mark my word.