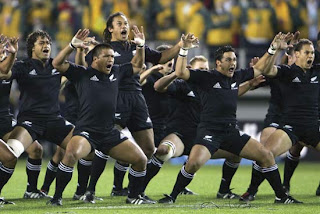 The New Zealand All Blacks are an awesome rugby team. Before a match they do the ceremonial Haka taken from Maori tradition. There are different forms of the Haka but one form and one translation that I saw on the All Blacks web site related to a historic battle. A Maori chief and a small band of warriors were greatly out numbered. The chief shouted out we're gonna die. The warriors responded we will live. This is repeated twice. Then the unified conclusion was live or die we will fight. It is a very moving a motivational chant. Ka Mate.