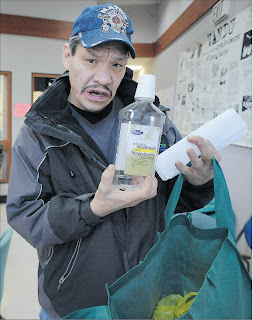 After reporting that an "advocate" wants more safe injections sites in Vancouver, the Vancouver Province ran a new article today about a guy who wants free booze for alcoholics. I'm not sure if they ran the article to show how absurd the Insite logic is or if there are actually people crazy enough to support such an absurd idea. It is the prime example of give an inch, take a mile. Some people just want more no matter how much you give them.

Some people want to turn the safe injection site into a safe inhalation site where people can smoke crack in a "safe" environment. Others ultimately want us to buy the drugs for the addicts. I kid you not. Where's that money going to come from? What schools and hospitals should we close so we can buy a drug addict poison and make the Hells Angels rich(er)?

Somewhere we have to draw a line. Funding a safe injection site is like handing out a plate with a revolver on it so people can commit suicide in a safe place then rationalizing it by saying well we didn't give them the bullets.

The feedback in the Letters to the Editor carry the same message:

Wait just a minute! Is Downtown Eastside alcoholic Rob Morgan actually saying he wants the government — taxpayers — to fund a lounge stocked with alcohol so that he and 40 others can get drunk for free?

Oh sure, there will be counselling and detox services provided with this “club,” but let’s not kid ourselves. I hardly doubt those services will be used when you’ve got a bar full of vodka, scotch and ice cold brewskies at your disposal!

Instead of enabling the addiction, why not go to AA, get sober, get a job and get off the streets!

The proposal to open more Insite supervised injection sites is just another goofy idea that will cost the taxpayers more money to cater to the never-ending problem of dealing with those who cannot take responsibility for their own behaviour and blame their misfortune on society.

I am sure Vancouver city hall will be most interested in pursuing this course of stupidity. They have a long record of doing so. Will the madness ever end?

Close Insite and tell addicts to get jobs

Now Downtown Eastside residents want another Insite and a lounge to drop in and drink free alcohol.

I have a better idea. Close the existing Insite and make these people work, instead of us taxpayers paying for their free ride!

Can I get free drinks too?

Where can I register for free drinks?

How about ecstasy rooms?

With the new plan to create a drinking lounge in the Downtown Eastside, isn’t this getting out of hand?

We recently have had young women die from taking ecstasy and it appears part of their reason for taking the drug was weight control. Should Insite now create a club for this problem too?