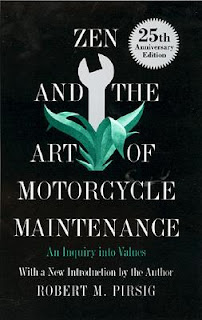 I’ve fallen behind. Yes I will write about Stephen Harpers new announcement to destroy Canadian pensions based on a lie because that is a National Emergency. Before that however, I want to pause for a moment and go retro.

When I was a kid I used to have a book called Zen and the Art of Motorcycle Maintenance. I liked it because I rode a motorcycle at the time and I was introduced to zen through my study of the martial arts. Back in the day, the martial arts was a way of life with a profound philosophy. It wasn’t about taking steroids and just ground and pound. That’s for people who never understood what the Gracie’s showed us in Brazilian Ju Jitsu.

Back in the day, riding a motorcycle was about living the dream. It was about freedom. Mobility rights – the freedom to move. The freedom to go where you want when you want. Yet it was more than that. It was about the American Dream. Life, liberty and the pursuit of happiness. Not the new dream which simply covets greed.

Sexual intimacy is a normal part of a healthy marriage. I am most certainly not saying that wives are supposed to be sexual slaves. I’m just saying that if the intimacy has been lost in your marriage, perhaps she’s just not into you any more. Perhaps she has good reason. Perhaps those old men just need to grow up or as we said back in the day, go back to living the real dream and remembering that enlightenment we all once knew when we were young.

I just bought an new copy of the book reprinted in 1999 on the 15th anniversary of the original printing. It came out in 1974 That makes the book 38 years old. Where on earth did the time go? The Book is titled Zen and the Art of Motorcycle Maintenance An Inquiry into Values. You don’t need a religion to have values.

Right before the introduction there is a quote that reads: “And what is good, Phaedrus, And what is not good – Need we ask anyone to tell us these things?” That pretty much sums it up. We don’t need a paid preacher or a corrupt politician to tell us what is good and what is evil. We can see and know that for ourselves. What we need is simply to open our eyes. Once we see the big picture, our lives will never be the same.