Top Scams and Cons of the old era 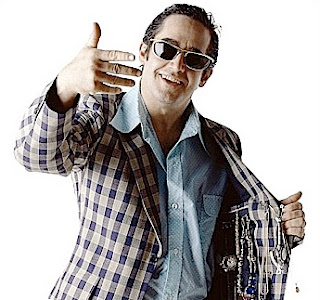 I heard a commercial on the radio yesterday about CTV News running a special on top scams of 2011. From Banking fraud to locksmiths, who's trying to scam you and how to protect yourself. Although I missed the report I think it is very timely. Another aspect of the New York minute is the hustle -the scam, the con. The person who is trying to rip you off.

Identify theft and scams are something we should all be aware of. What about the big time scams that embezzle entire pensions? Since 2012 is the beginning of a new era, perhaps it's worth looking at a series of large scale scams from last year and beyond to examine the pattern these cons follow so we can indeed protect ourselves so we won't get fooled again.

Obviously in the United States bailing out the investment fraud on Wall Street was the top scam of the old era. Yet unbeknown to most, Canada had a similar scam. It took Canada from a $2.3 billion surplus to a $64 billion deficit with one swoop of the pen. That is significant.

Stephen Harper started off talking like a Conservative. He told the British Prime Minister that we don't think we should bail out the banks with tax dollars. Then he completely flips and gave them $75 billion.

The most bizarre thing of all is that most Canadians don’t know we bailed out our banks. Partly because the Harper government lied about doing so. If you remember when the Occupy movement was just starting to take root, the Harper government told the media that Canada was unlike the United States and didn’t have to spend tax dollars on a bank bailout. I myself thought that was true. It turns out that wasn’t true and that statement was a bold faced lie.

Brian Mulroney was directly involved in one of the top scams of the old era. The Liberal government has accused him of getting a kickback in the Airbus scandal. He responded by suing the government for slander. He lied about his relationship with Karl in his court affidavit and the Liberals agreed to an out of court settlement of $2.1 million.

First, that settlement should not have come out of the tax payers pocket. If the Liberal party defamed someone then the liberal party is liable for the libel so to speak. A former civil servant suing the taxpayer is hypocritical at best.
Second, Mulroney lied. He committed perjury in his affidavits. The Liberal government hadn’t committed slander, they told the truth. He did receive a kickback for the Airbus scandal and he lied about his relationship with Karl. That means Brian Mulroney embezzled $2.1 million from the Canadian taxpayer and committed perjury. Mulroney should be charged criminally for the perjury and sued civilly to recoup the stolen $2.1 million. Scams are nothing new to the former Prime Minister. According to retired US Navy intelligence officer Al Martin, Brian Mulroney was involved with Bre X.

The BC Rail scandal make the top scams of the old era list. Not because selling public assets to their political friends and fire sale prices is anything new or shocking. It’s because of the direct ties to Gordon Campbell and Christy Clark as well as the party’s connection to money laundering and cocaine trafficking.

After the plea bargain was struck in the Bassi Virk case, Gordon Campbell publicly chastised them for wasting so much of the tax payers money by stalling off the trial past elections only to conclude by pleading guilty. That was obscene hypocrisy. They stalled off the trail to benefit him. The coped a plea bargain to benefit him. Then he goes and publicly blame them? That was offensive.

Then we find out that Sith Lord Christy Clark was also directly involved in the scandal not just her brother. Yet the biggest con of all was the cocaine trafficking charges that were dropped as part of the plea bargain. Bassi’s cousin was convicted of cocaine trafficking. Yet all charges against him and the BC Liberals were mysteriously dropped. Not long after that the RCMP renewed their contract in BC with those same Liberals after much talk of reverting to a Regional Police force.

The HST was a top scam on 2011. The government spent millions of tax dollars on advertising trying to convince the public that the HST would lower taxes. Spending tax dollars on telling the public how to vote on a referendum was a scam in itself. Claiming the HST would lower taxes was a lie. They would not have spent that much money on advertising if it was going to lower taxes. They spent that much money on advertising because it was going to increase revenue. Taxing something that was previously tax exempt is not lowering taxes.

Smart Meters is a top scam of 2011 and continues in 2012. Having a hydro meter report it’s usage without having to manually have someone go physically check the meter is one thing. Maintaining covert surveillance on the public is another. The public campaign to stop the Smart Meters continues in the New Year. Yet adressing the cause of the BC Hydro debt scam is even more important.

The invasion of Iraq was a top scam of then old era. Weapons of mass destruction. The Americans sold Iraq chemical weapons to use on Iran during their war with them. Hanging Hussein, who they put in power, for using the chemical weapons he bought from them on the Kurds was hypocritical at best.

MI 6 was caught red handed giving false information to the media about Iraq’s Weapons of Mass Destruction. They were trying to gain public support for an invasion. Operation Mass Appeal was yet another in a long list of scams involving military intelligence.

The 911 Truth movement was well represented at the George Bush demonstration in Surrey. Not everyone agrees with the official version of events. Claiming that the third tower, the one that was not hit by any planes, collapsed into it’s own blueprint at free fall speed was due to heat and fire is clearly a top scam of the old era. That is not scientific. Engineers will confirm that.

The BBC reporting the fall of the third Tower before it fell was yet another scam. Later the BBC claimed that if they had reported the fall of the tower before it fell, that did not mean they were involved in the conspiracy. It only meant they made an error. Not likely. That’s like reporting a bank robbery before it happens when it did in fact happen. A mistake would be reporting that something happened when it didn’t. That would be a mistake. Reporting something that did happen before it happened wasn’t a mistake on their part. It just meant the people responsible sent out the press release a few minutes early.

Larry Silverstein buying the Twin Towers right after the Port Authority lost the court case to force the insurance agencies to pay for the asbestos removal was another top scam of the old era. The Port Authority were denied a permit to demolish the Twin Towers because it was half full of asbestos and that would create a health hazard for the general public. Shortly thereafter two planes crashed into the Twin towers bringing them down just like a controlled demolition at free fall speed.
Larry Silverstein went to court with the Port Authority at his side and was awarded twice the value of his investment because two planes were involved in the attack not just one. That’s like insuring a car worth $20,000 that gets in a three car collision and being paid out $40,000 twice the value of the car just because it was involved in a three car collision instead of a two car collision. Larry Silverstein doubling his investment from 911 was another tragic scam of the old era.

Julie Couillard was MP Maxime Bernier's girlfriend. He was caught leaving sensitive military documents about Afghanistan in her possession. Later she claimed Maxime told her that the war in Afghanistan was about control of the opium trade. It had nothing to do with democracy or liberation.

The media claimed that if the American soldiers didn’t help the opium harvest the farmers would be angry about then lost revenue and blame them. Yet the Taliban had eliminated the crop so it wasn’t a matter of stopping something they were already doing. It was a matter of letting them do something the Taliban had stopped. Invading Afghanistan and returning it to the world’s largest suppliers of opium is yet another top scam of the old era.

Last but not least, the top scam of the old era goes to the Greek Financial crisis which was a manufactured emergency resulting from investment fraud that Goldman Sachs helped cover up to rip off the EU from that massive bailout. Buyer Beware, bank bailouts from investment fraud need to be addressed.