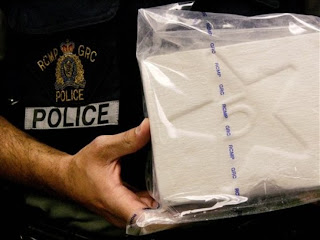 Wow. Holy Pandora's box Batman. The Vancouver Sun and the Vancouver Province are both reporting that the Merrit RCMP Detachment commander has been accused of stealing and using cocaine from a police exhibit. Staff-Sgt. Stuart Seib, Merritt RCMP detachment commander, was arrested Tuesday and charged with theft Wednesday. Additional charges are pending.

"On Friday, Jan. 6, we became aware Staff-Sgt. Stuart Seib stole and used drug exhibits," said Sekela, adding that there were multiple thefts. Seib was made detachment commander in Clearwater in 2003 and was transferred to Merritt in November 2011. He has also worked in Alert Bay, Ashcroft and Prince George. Investigators will go back over Seib's 18-year RCMP career to deter-mine whether any other offences may have taken place.

Prince George? Like that's not a red flag. Hells Angels drug capital of BC. Prince George is also the place when a court judge named David Ramsey was convicted of sexually abusing under age native girls. Some police officers were also accused of being involved and helping to cover that heinous crime up.

Last night I just watched an old Stephen Seagal movie called Exit Wounds where a rouge cop goes into a crooked detachment and with the help of some honest officers, confronts a drug related police corruption ring. That kind of thing only happens in the movies. So we thought.