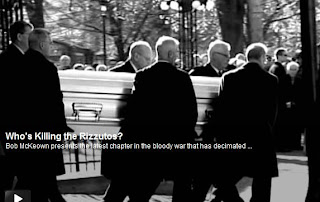 Last night the Fifth Estate ran a segment on the Montreal mafia murders called Who’s killing the Rizzutos? It was an interesting background but cut short before they answered the question. They ended it with the murder of Sal the Iron Worker and the arrest of Raynald Desjardins without a word said about the other Hells Angel associates arrested with him.

In fact the Hells Angels involvement with the Rizzutos and subsequent conflict with them wasn’t even mentioned. Sad. The question is, when Vito Rizzuto gets out of jail in 2012, will he wage war against the Hells Angels for teaming up with his enemies to murder his family? Time will tell. It always does.