While we wait to see the speeches delivered at the Ottawa Rally posted online, I want to address Jagmeet Singh's offensive lie. We all know the media's malicious misrepresentation of the trucker's Freedom Convoy has been ridiculous just like their misrepresentation of the recent massive rally in Washington. That's why I wanted to post videos from first hand witnesses so people can see for themselves what really happened and what was really said.

Someone just posted a link to a Tweet from convoytooattawa2022 showing how to spot someone planted within the convoy. They hide their face and look like ANTIFA while everyone else is smiling maskless. However, when I scrolled up I saw that it was replying to this really offensive tweet from Jagmeet Singh and want to address it. It is a really ofensive lie.

He equates the Freedom convoy with white supremacy and with terrorists who would bomb a Mosque. That is so ridiculous it is really offensive. That statement is racism and we need to rise above it. That is something ANTIFA would say. You know, the ones who built the Berlin wall to keep the Western Fascists out. The same Western Fascists who fought Hitler in the trenches.

It is reminiscent of the ANTIFA scum who were screaming at a little old lady with a walker preventing her from crossing a street yelling Nazi scum get off the street. Her husband fought the Nazi's in the war. The Communists claim everyone who disagrees with them is a fascist and that is exactly what Jagmeet Singh is now doing. He is the racist just like Communist China is.

It is no secret that Jagmeet Singh actively opposes the values of the Sikh Temple. He supports gender based abortion. I'm not sure how killing all your women is promoting woman's rights. If you kill all your women, in one generation who are your sons going to marry? Jagmeet Singh is a fake feminist just like Justin Trudeau. Leslyn Lewis is not.

Jagmeet Singh wants to legalize all drugs. The Sikh Temple does not.

Rebel News has a reporter covering the convoy that is Muslim.

Many of the truckers who left Vancouver on the Convoy are Indo Canadian. Jagmeet Singh's own brother in law donated to their cause. This truckers convoy in Canada is exactly like the Farmer's protest in India and Jagmeet Singh is opposing it with offensive lies.

I have spoken at great lengths how wonderful my Muslim neighbors are. Their kids are adorable. I support immigration because diversity makes us strong. I also support the truckers convoy for the same reason. This is a united movement that promotes freedom for everyone. It's about freedom in the face of oppression. That is what this is about and Jagmeet Singh is on the wrong side. 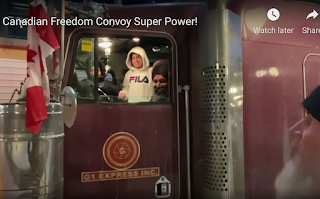 I will also say a word about false flags. There is not a snowball's chance in hell anyone from the Freedom convoy or any of it's supporters vandalized a Terry Fox statue. That was a false flag. No one in the movement had a reason to deface the statue. The only ones who had a motive to vandalize the statue are the Communists calling the Freedom convoy Fascists. When Conrad Black started buying up all the media outlets, the media became biased. When the Communist Party of China bought Disney and Conrad Black's media empire it became ridiculous.

Putting a fag on the stature like a cape is not defacing it. Terry Fox is a Canadian hero just like these truckers. The flag upside down is a distress symbol. It is a cry for help because our liberty is being stolen from us. "For hundreds of years, inverted flags have been harnessed as a signal of distress. Hoisting the ensign upside-down was also a potentially covert way in which sailors might share that their ship had been taken by hostile forces and was being manoeuvred nefariously." That is exactly what's happened to our country during Covid.

If someone had defaced a statue of John A MacDonald and tore it down, the fake news would be applauding it. Their hypocrisy is absurd. They are promoting lies to remove our civil liberty.

Thank you Truckers for uniting Canada in the #ConvoyForFreedom
And @standonguard #howard3824
God bless you all!!! pic.twitter.com/j2RkW2wkqO

As Ezra Levant points out, CSIS founded and funded the Heritage Front.

One of the Communist news outlets erroneously claimed that the truckers were dancing on the tomb of the unknown soldier. That is an offensive lie. All of the truckers and all of the supporters support our war heroes. That is why we are here. To support the freedom they died for. Though poppies grow in Flanders Field. We're from the west side. West side of the wall. The Berlin Wall.

COVID Deaths 5 Times Higher In Vaccinated Than Unvaccinated in India

Looks like the Calgary mayor needs to listen to his own constituents. Rebel News confirms that social media reports of a trucker crashing into barricades in Ottawa are untrue - False.

Posted by Dennis Watson at 6:37 AM