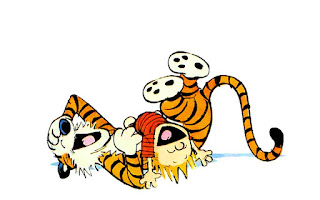 Today I want to confront two lies. One is hilarious, the other is not. Both are ridiculous. The other day I saw an article claiming Postmedia News wanted to become the new Fox News north. That was hilarious. Postmedia News bought Global Television which has become absolutely ridiculous. It's worse than the View. Just regurgitated liberal nonsense over and over again.

When Postmedia News bought the Toronto Sun they ran an article claiming Chairman Mao did great things. That wasn't just bat sh*t crazy, that was an obscene insult to every soldier who served in Flanders Fields. They died for something better. They were from the West side. West side of the wall. The Berlin wall. When I tried to find the article today I couldn't find it. I could just find old articles about Stephen Harper trying to create a Fox News North which in itself wouldn't be a bad thing. It's just that Postmedia is not it. Which brings us back to the Toronto Sun.

Recently I wrote about Tara Henley's resignation from the CBC. The Toronto Sun interviewed her and claimed that they were more of a conservative newspaper. At the time I thought WTF are you talking about? Promoting Chairman Mao is not Conservative. Then the light went on and I understood why Anthony Furey is sucking up to Candice Malcolm over at True North.

I don't want to hate. Anthony *seems* sincere. It's just that his employer is not. All the concerns Tara Henley expressed about the CBC apply to Postmedia News and Postmedia News owns the Toronto Sun. A bitter tree cannot bring forth good fruit. It it's roots are evil, the entire tree is evil.

Candice Malcolm​ sometimes writes for the Toronto Sun. I have no question about her integrity. Yet let's be honest. There is no money in the truth. If you want to get rich, you have to buy into the narrative. The one that's killing our country and robbing the bread off our tables. In essence, if you want to make money in journalism, you have to sell your soul.

Youtube has demonetized every Conservative on their platform. You can still post on Rumble but you're not going to make the coin Lilly Singh made. Google will bury you. Google adds suck. I completely removed them because they were cheap and trashy.

It is possible Postmedia news wants to create a fake Fox News North with the sole intent of leading Conservatives astray. They would promote Globalists like Erin O'Toole and redefine the political spectrum by calling Globalist conservatives moderates while rebranding true Conservatives as right wing extremists. There is nothing extreme or controversial about low taxes and small government. There is nothing extreme or controversial about defending civil liberty.

Now that the media sees the double vaxxed are not buying into the fake fear, they are dialing up the lies. They claim the hospitals are full of Omicron patients. That is a lie. They said that about Covid when Covid was here before it was watered down through replication and they were lying then too. Rebel News caught the CBC lying about the hospitalization rates in Manitoba. They also caught Postmedia News lying about the hospitalization rates in Edmonton. When we listen to these ridiculous fake news reports we need to remember where they are coming from. They are coming from the same people that claim the Tiananmen Square Massacre never happened.

When Covid first hit, CBS ran a video of a hospital overflowing with Covid patients claiming it was in Donald Trump's hometown. When it was proven that video was of a hospital in Italy not New York, CBS said they made a mistake and that is was an editing error. It was no error. The Australian news used the same video and claimed it was a hospital in Australia when in reality it was one in Italy. That wasn't a mistake. It was malicious misrepresentation.

Over and over again the media claimed there were lineups at American hospitals with body bags in the streets. People would go there and videotape empty hospitals on their phones. Then YouTube would delete the videos. Now we have Rumble and Bitchute. The point is it happened.

Several months ago my neighbour was at a jobsite in Chilliwack. Everyone was frantically packing up their tools and leaving. My neighbour said what are you doing? It's not quitting time yet. Haven't you heard? All the hospitals in Chilliwack are full of Covid patients. He laughed and said all the hospitals? Chilliwack only has one hospital. Let's go take a look. So they went there and found another empty hospital. Just like in California.

Now that Bonnie Henry and Adrian Dix's popularity is plummeting, I saw an article where they started to back peddle. Bonnie Henry was saying hospitalization rate data is difficult to interpret because there is a difference between someone going to the hospital for a surgery and testing positive because they caught Omnicron there as opposed to someone who came to the hospital with severe Covid symptoms. The data is and consistently has been misrepresented.

Adrian Dix also made a very honest statement about ICU occupation rates but once again I have to find the article to get the exact quote. My point is the media is lying. They never stopped lying. That is why so many medical coalitions have posted websites to counter the false information the media is bombarding us with. They're not full of unvaccinated patients either. That is ridiculous.

The unvaccinated aren't going anywhere or doing anything to create an outbreak because of the vaccine passports. The statistics show that Omicron targets the vaccinated far more rapidly than the unvaccinated. Their lies have become ridiculous. The media controlled by the CCP is desperate because people are starting to see through their bullsh*t and are getting angry about unnecessary lockdowns. Those lockdowns simply constitute a trade war with Communist China.

Since no one is afraid of Omicron, the media has started to falsify death rates as well as hospitalization rates again. There is a big difference between dying with Covid and dying from Covid. In Calgary they were caught claiming someone who died of cancer died of Covid. Dr. Hodkinson came right out and said Covid does not cure cancer and lockdowns do not cure heart disease. The fact that those deaths dramatically dropped during the lockdown show they have been falsifying the death rates all along. A co worker's wife's Uncle recently died of cancer. He went to hospice because he was dying of cancer. Before he died he tested positive for Covid so they called it a Covid death. This happens all the time. They are still falsifying the death rates. 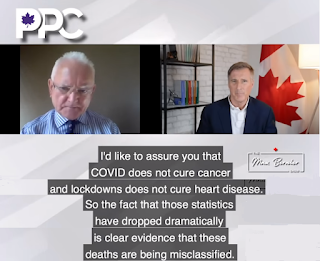 "B.C. health minister Adrian Dix also revealed Friday that the province’s hospital beds – currently at 95.1% capacity under COVID – operated at nearly a 10% higher capacity even before the pandemic began. Dix said that during the winter flu season before COVID in 2019, hospital beds were at 103.5%. “It’s not just an issue of we have this many beds available,” he said. “It’s also a significant staffing issue, which is why we are taking the steps we are taking.”

Less nurses because of the vaccine mandate mean less hospital beds available. BC was at a higher hospitalization rate before Covid during the regular flu season. The media's falsification of the Covid hospitalization and death rates constitutes organized crime. 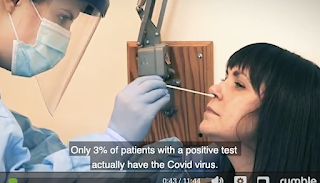