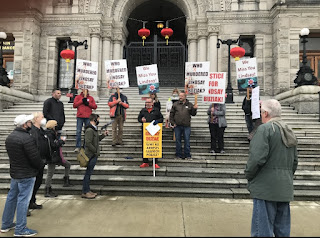 Update: Jeff Buziak was on CKNW February 3rd at 2:06 PM

The Saanich News is reporting that "Holding signs that read 'we miss you Lindsay, and 'who murdered Lindsay Buziak, why no arrests Saanich police?' attendees began their walk from Saanich city hall to the B.C. legislature Wednesday morning. The 12th annual Lindsay Buziak Memorial Walk for Justice, led and organized by the murdered real estate agent’s father, Jeff Buziak, once again brought awareness to the still unsolved case."

The Saanich Police Department now has its 5th Chief sworn in since Lindsay’s murder. That is 5 Chiefs in 14 yrs. The common denominator in this cover up is Chris Horsley. He's still there.

This is what Jeff Buziak posted on Facebook. He is moving back to Victoria.

Lindsay was going about her day as an ambitious young realtor; showing a home to prospective buyers. There is zero reason that she should have feared for her life that day.

This is the 12th consecutive year that I’ve led this memorial walk seeking overdue justice for Lindsay. Who does this? Well, grief-stricken family members who have not allowed their lives to be totally ruined by such a devastating loss. That’s who!

Nearly half of all parents who have had a child murdered never recover. Many of them suffer from deep depression and/or become alcoholic or drug dependent. Some even commit suicide. Some become vigilantes and take the law into their own hands.

What would you do? I sincerely hope that you never have to find that out! Who has to do this? Devastated and very upset family members like me; along with friends and great supporters like you who still believe in justice and accountability. That’s who.

The conspirators and murderers must be held accountable and face justice for the brutal act they imposed upon Lindsay. Conspirators, murderers? Yes, Lindsay’s murder was carefully planned and brutally executed.

Someone, perhaps several people out there know something that would yield the evidence to finally arrest, charge and convict those responsible for my wonderful daughter’s death. Anyone who has this information and does not step forward and share what they know is as guilty of Lindsay’s murder as if their hand was on the knife used to end her life.

Please Do the right thing. With that information comes a responsibility to act! Come forward to police and share what you know. Yes, they do need our help and I cannot make arrests.

Should anyone need to walk like this year after agonizing year? No, of course not! We should all be safe in our communities as we go about our daily business. Unfortunately, evil and evil doers lurk around us. We expect our police to protect us from them. However, when those evil people strike, we also expect thorough, speedy and efficient action from authorities.

We should expect and demand that the perpetrators be arrested, charged and face a court of law in a timely fashion. More importantly, Police and the politicians appointed as their overseers must be held accountable when they fail us like they have here. These people all work for us. The trust in police, the courts and our government leaders are currently at an all time low. No one knows who or what they can believe in or trust anymore. This needs to change now! Starting today!

Imagine if Saanich had a Police Chief and Mayor who actually showed up to this walk. Even a local MLA or the current Premier of British Columbia who lives in this area. Imagine the statement of determination and commitment to actually solve this case that would be sent to the murderers and all concerned citizens. Imagine how much more supported victims’ families and the community would feel if they believed that our leaders and the police actually cared. Where are they?

This year I am stepping it up once again. I have re-established a residence in Saanich and I am in the process of moving back here. I lived and worked in Saanich for many, many years. I attended the University of Victoria where I obtained my degree. I received a 20-year pin from the Victoria Real Estate Board. My children were born, raised and educated in Saanich. My most cherished memories of Lindsay are here along with the saddest one which has been dragging on now for 14 years!

Late last year an experienced new head was appointed in charge of Lindsay’s unsolved murder investigation. He is not a Saanich police officer. For the first time in 14 agonizing years, I have a reliable and regular contact for updates. Someone I can speak with who isn’t trying to manipulate, speak down to or threaten me. Now, I want to be closer so that all my contact can be face to face rather than over the phone.

As well, The Saanich Police Department have again internally appointed a new Chief Constable, Dean Duthie. The fifth Chief at Saanich police since Lindsay was brutally murdered. Hopefully his new leadership also brings a more serious effort and commitment. Mr. Duthie is the father of daughters so his concern should be high with a murder of a young woman at work that is unsolved in Saanich.

Chief Duthie I wish you success in your new role. Just know that we will be watching and we will hold you accountable. How many Saanich police chiefs does it take? Lindsay’s murder must be solved! Now!

Mayor Fred Haynes; you are the Chair of the Saanich Police Board and have overall responsibility for the effectiveness of policing and safety in Saanich. You are also nearing the end of your 4-year term in office as Mayor with a regular general election scheduled for October 15th this year. Will you be back? Are the citizens of Saanich satisfied with your efforts in keeping them safe and bringing murderers in Saanich to justice?

No! The lack of results and zero communication from you on this matter speak volumes as you are ultimately the one responsible in Saanich as chair of the police board. Mr Mayor, Do something Now!