The Toronto Star is reporting that "The Toronto Zoo has lost one of its newest members, a young red panda born three months ago affectionately known as Baby Spice. The zoo says the red panda cub’s death was unexpected and sudden after the cub, who showed no signs of illness before this past weekend, suddenly became ill on Sunday morning." Maybe giving animals or kids the Covid RNA vaccine isn't such a good idea after all. Just sayn. 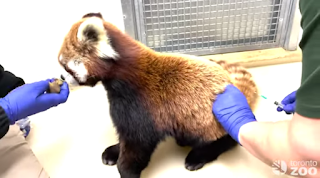 Think about the profits the vaccine companies are making. One shot, two shot, three shot, booster shot. That was a scam for them to increase their profit. Vaccinating animals? That's another scam. They literally want to make sure everyone and their dog is vaccinated so they can literally make a killing. All those tax dollars could be better spent on other things.
Posted by Dennis Watson at 5:22 AM