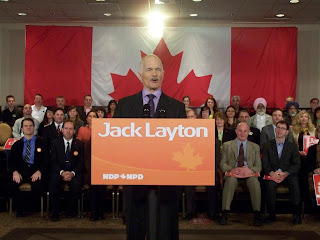 Jack Layton visited Surrey this morning and I had to check it out. The media has been playing up on his health but he looked pretty strong and vibrant to me. He walked with a cane and did the scouting tradition of shaking with his left hand because his right hand was supporting himself with his cane. When he shook my hand he looked into my eyes and all I could say was thank you. Thank you for coming to Surrey and thank you for standing up for what we believe in.

I was surprised to hear Jack Layton promote small business. Jack Layton truthfully pointed out that New Democrats opposed the HST federally. That was not lip service. He pointed out that the federal conservatives in BC still supported the HST when they knew how deathly opposed to the HST the residents of BC really were. He said, if the people of British Columbia can't trust their conservative MP's to represent their will on an issue like the HST, how can the people of British Columbia trust the federal conservative to represent their will on any other matter? So true.

Fleetwood Port Kells candidate Nao Fernando introduced the speakers and spoke well. He cited a list of things he believed in and said New Democrats know what they believe in, they believe in families.

Jack Layton also spoke about not rewarding big corporations for shipping jobs overseas like raw logs. Why would we export raw logs only to buy them back after they have been processed by other countries? That doesn't make sense. Neither does rewarding companies for off shore call centres. Even the mighty Obama agreed with that.

Strong families, better health care, better education, small business, no HST. All of his current positions used to be traditional conservative values which have been sold out for the neo con.

Jack Layton pointed out that in most ridings where conservatives were elected in BC it was the NDP who came in second and that it's the NDP who are capable of defeating Harper in BC which is very true.

Chuck Cadman was a legend in Surrey North. After his death his wife Donna later endorsed Penny Priddy who won that seat for the NDP. After Penny's term was up she ran for Surrey city counsel while Dona Cadman ran for Surrey North under the Conservative banner. Chuck Cadman was reelected as an independent. It was very surprising to see Donna Cadman run for the same party that tried to bribe her husband. 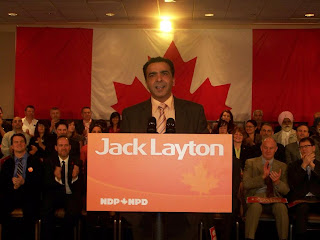 BTW the NDP are advocates for protecting pensions which is something the neo cons have sold out and are recklessly destroying. Jack Layton's motto is families first and no one gets left behind. Remember the Rambo movies? No one gets left behind? The neo con have abandoned that pledge a long time ago. It's time we demonstrate a little self respect and stop exploiting the elderly and physically challenged.

Closing Riverview and putting all the mentally ill on the street diminished all of us. You can't support a strong economy while you build reckless debt and ship jobs overseas. Coming home from the rally I saw someone put up some signs that said No surprise Bill. Turns out it was a cell phone company advertising unlimited text promising no surprise bills compared to other cell phone companies where hidden costs produce a rather surprising bill indeed.

At first I thought it was an election sign referring to Stephen Harper. Harper submitted a budget to the House of Commons without submitting the budget. He hid the costs and asked the house to vote on his budget without knowing the costs saying he'll surprise us with the costs later. He'll surprise us all right. By railroading the HST through in a Senate he just stacked after he promised an elected senate.

Recently someone on the blog asked me who I thought would best lead Canada and I said I didn't trust any of them with a majority government and since I didn't trust Harper or Iggy I was stuck with Jack Layton. I take that back. I know what I believe politically, socially and economically. I am not a neo con. I am a new democrat. I believe in real democracy and in social justice. I believe as Jack Layton pledges in Families First and No One gets left behind. Just like Carol James' motto of how everyone matters. That is the dream. That is what I support.

I'm in the process of uploading the video clips I took of Jack Layton's speech today in Surrey. No doubt it will be highly edited by the media.

The bottom line is trust. The shaking with the left hand tradition in scouting came from Lord Baden Powell. He was the founder of the scouting movement and some of the main hiking trails in Vancouver are named after him. The Lord Baden Powell trail stretches from Deep Cove, through Mount Seymour, Grouse Mountain, Cypress and on to Horseshoe bay.

Anyways, the shaking with the left hand tradition in scouting comes from Baden Powell's experiences with the Zulus in Africa. The Zulus held their spear in their right hand and their shield in their left. Shaking hands with the left was a sign of trust because it meant you had to put down your shield to do it. Likewise, I trust Jack Layton.

What would I do if Jack Layton actually became Prime Minister? Well, I think he would put an end to the HST and I don't think he would take money from schools and hospitals and spend it on the neo con Oil Wars. I think he really would promote small business, free enterprise and by not rewarding large corporations for sending Canadian jobs overseas I think that really would help the economy.

As for the neo con name calling all I have to say is that the neo cons don't know Jack about our traditional values. Word.

Here is the test of Jack Layton's speech