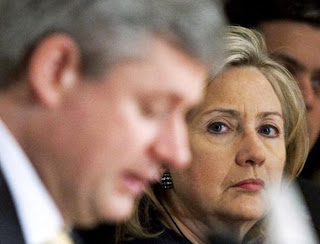 So Harper is getting cosy with Hillary Clinton. Great, that's all we need. I sure hope Harper isn't still using that old PROMIS software we bought from the States. It was supposed to help US Allies categorize information but really was a Trojan horse that let the CIA spy on it's allies. As if that comes as any big surprise.

Recent Wiki Leaks documents show that Secretary of State Hillary Clinton ordered U.S. diplomats, the CIA, and the FBI to spy on highest echelons of UN officialdom. Hold the door, that certainly comes as no big surprise either. I will add that the CIA certainly didn't need her permission to do what they have always done.

I find it very concerning that they would be in an uproar when WikiLeaks releases information about them but not their political opponents. That is a flaming red flag and a huge concern. The rhetoric they spew to rationalize their concerns is offensive. Pretending it has anything to do with saving innocent lives. Innocent lives are saved when we expose and confront corruption not when we hide or rationalize it.

Since Hillary Clinton has stepped up to the plate to be the CIA and Joint Chiefs of Staff PR Person for the invasion of Libya, perhaps we should ask Ms. Clinton to answer about her involvement in Mena Arkansas? After all she was first lady to the Governor of Arkansas who helped hide and cover up the CIA's cocaine smuggling operation that went on out of there for so many years.

In fact it has been said that she was a partner in the Rose Law Firm that had some questionable involvement in that affair. Then there was Whitewater. Why did Bill Clinton support that crooked corner who falsified death records and tampered with evidence ruling several murders in Arkansas suicides? Let's ask those questions and get those answers. Her connection to the Shadow government is quite concerning. Reminiscent of Vice President Johnston who took over after Kennedy was assassinated.

BTW this blog just broke over a million views. I guess someone is actually reading some of this nonsense. And just for the record, France leading the bombing in Libya is a conflict of interest. They have been pals with Gadaffi for many years until he recently broke off ties with them. Now all of a sudden France wants a new leader there. Like that's not suspicious. France did have colonies in Africa BTW just like England and Spain did in the Americas. Sarkozy denies Gaddafi's donations claim of course.

Wow, look at all the countries ready to pounce on the spoils of war and seize all of Libya's assets. I'm sure they'll give themselves lots of congressional medals of honour for that theft.