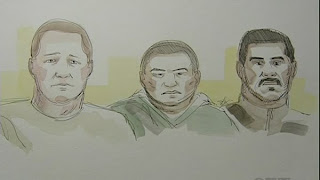 Since Sounthone Chareunsouk was a member of d'allégeance bleue gang and one media outlet in Quebec suspects that gang is responsible for the dastardly deed.

Operation Axe established the affiliation between a major street gang allegiance blue, the Syndicate - affiliates of the Hells Angels - and a well-structured crime cell dedicated to drug trafficking in South West Montreal.

We know Gregory Wooley was Mom Boucher's pal who hooked the Hells Angels up with the Crips in Montreal helping them take over that drug trade. He was denied statutory release in 2008 but his sentence ended on Dec. 26, 2009.

The Syndicate is a gang that developed out of the Nomad chapter through Gregory Wooley, a Hells Angels associate who formed the Syndicate years ago. Zephyr took control of the gang in 2006 while Wooley, who has yet to be tried in Project Axe, was behind bars.

We also know that the dirt bags who killed the elderly Rizutto in his own home with a sniper in the bushes in front of his own family was not Italian. Nor were the dirt bags who firebombed a funeral home. That does sound more like low life Hells Angels affiliates.