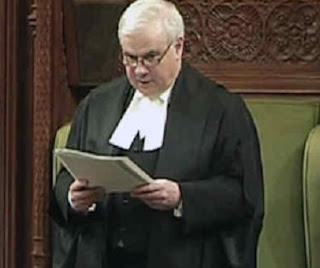 The Speaker of the House has ruled against the Harper government claiming they breached parliamentary privilege by refusing to provide all documents the Standing Committee on Finance requested detailing the full cost of its crime bills. No kidding. How much will it cost to send every Canadian citizen who smokes a blunt to jail? How will that help us deal with violent crime and hard drugs in the face of already over crowded prisons in an economic recession?

The government wants to take more money from us to put more of us in jail. What a democracy. Don't get me wrong, we need changes in our judicial system. We need prudent course corrections not sweeping catastrophe. House arrest for trafficking cocaine for the Hells Angels is insane. We won't have any money to fix that problem if we spend more than we have sending all the pot smokers to jail. Crack and meth are the problem, not pot.

Locking a prolific offender who commits a large amount of crime to pay for their drug habit in jail for three months is logical and prudent. Sending everyone to jail who jay walks, smokes a joint or drives after having two drinks with dinner is not. It really isn't brain surgery but Harper isn't getting it and Ignatieff is an idiot.