Ontario's Criticism of their Judges 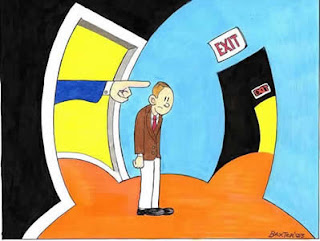 I find it somewhat interesting that while some claim criticizing a judge's decision in B.C. is blasphemous, Ontario doesn't seem to have a problem with it. Over minor issues. The latest one is described in an article in the Globe and Mail.

The Globe referred to one as the judge who writes like a paperback novelist. The article claims that because one Ontario judge uses complex sentences in his decisions and writes like a crime novelist he is out of control and should be the subject of a judicial council complaint.

I'm not going to get into the merits of the complaint against the judge, much. Other than the obvious fact that I really don't see what the big deal is. If he overturned a murder conviction and the evidence would lead one to believe that he should not have overturned that conviction then speak to the conviction not the words he used to describe it.

The article admits that Judge Watt’s transformation is seen by some as part of a welcome trend away from impenetrable, legal jargon. No kidding. The uproar is that others feel that the author of a judgment ought to be an invisible presence. Yeah whatever. Hence my point: the big deal isn't really a big deal.

What I do find interesting is this whole judicial council complaint process that seems to be such an active tool in Ontario to deal with bad judges shall we say. Why can't we use a judicial council to get rid of a real idiot like Peter Leask?

I'm not talking about minor concerns about his unprofessional swearing in court. I'm talking about his treasonous decisions that let a Hells Angel off Scott free when he was caught red handed loading boxes of 52 kilograms of cocaine from His storage locker onto a truck. He was caught red handed and Peter Leask let him walk. The accused said he didn't know what was in the boxes. Those kind of judicial decisions constitute treason.

Finally some of Leaks bizarre decisions are being appealed and overturned but that is such a long and expensive process. Let's do the world a favor and fire his ass through the judicial council complaint process. Don't we have one in BC? Only in Ontario? Why is that?