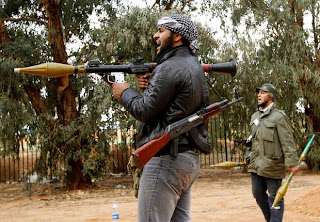 A convoy of rebel vehicles could be seen Sunday moving westward toward the oil town of Ras Lanouf, the latest town to be recaptured from forces loyal to Libyan ruler Moammar Gadhafi.

Ras Lanouf and Brega were responsible for a large chunk of Libya's 1.5 million barrels of daily exports, which have all but stopped since the uprising that began in mid-February and was inspired by the toppling of governments in Tunisia and Egypt.

Rebels had appeared on the verge of defeat, but have claimed victories in recent days following coalition air strikes, carried out to enforce a UN-mandated no-fly zone. Their ultimate goal is to reach Gaddafi's stronghold of Tripoli.

Obviously our bombing of Libya has absolutely nothing to do with establishing a no fly zone or a cease fire and has everything to do with taking over Gaddafi's oil. Canada joins the neo Con Oil Wars.

And of course as soon as the armed Rebels took the oil town the Allies let them start shipping oil to fund their rebellion. This invasion is about oil and nothing else.