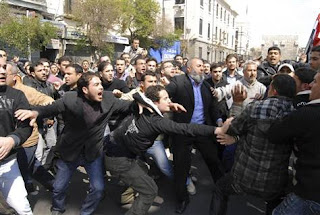 Violence in Syria breaks out over the protests there. Does that mean the Western allies will start bombing Syria next? Of course not. Syria doesn't have oil. Libya has oil. The largest oil reserve in Africa. Let's see how the Allies divide up that theft between them.

Dan Gardner wrote a bizarre editorial claiming that the bombing and invasion of Libya shows why Canada needs to purchase more fighter jets. Not. That is the exact reason why we shouldn't buy them. So Canada doesn't join in the oil wars and start bombing foreign countries for their oil.

Indeed the whole concept of the Conservatives being in contempt of Parliament is unprecedented. No other political party in Canada has ever refused to disclose itemized budget costs when asked to produce them for the House to debate and vote on the budget.

I take back what I said about Stephen Harper. I don't think he is stupid after all. I think he clearly is malicious as well if not more. It's those quiet awkward ones ya gotta worry about. They're the ones that end up being serial killers. So how many civilians have the allies murdered in Libya so far anyways?

Harper says one thing and does another. He talks about reducing taxes but spends more and instigates new taxes like the HST. Dropping the GST a percentage then raising it and taxing things the GST doesn't tax under the HST is deceptive.

Harper said he supported an elected Senate. Yet he pulled a Brian Mulroney and stacked the Senate to ram his HST through just like Mulroney did. Harper would have invade Iraq for their oil. Now he is invading Libya for their oil. This is a very bad precedent for Canada. Bombing Libya has nothing to do with creating a no fly zone or a cease fire.

In Libya the protesters took up arms and started firring on Gadaffi. He fired back. That is a civil war not a peaceful protest. There's a big difference. When a civilian takes up arms and starts shooting at the military, they are no longer civilians, they are rebels. Shooting an armed rebel is different than shooting an unarmed civilian.

Like I said, I'm no fan of Gadaffi, but I do object to this invasion completely just like the invasion of Iraq. Where were these greedy oil mongering bastards in Rwanda? Rwanda was a real human rights crisis and no one cared because they didn't have oil.

So stop pretending we are doing anything noble in Libya because it's obvious we are not. Our actions and motives are suspect and we should be ashamed of ourselves. Sarkozy is not trustworthy.

A series of classified US memos depict the French president as a self-absorbed, thin-skinned, erratic character who tyrannises his ministers and staff. He is portrayed as undiplomatic, hyperactive, sometimes uncouth and in need of careful handling, despite being the most pro-US French president since the second world war.

Sarkozy admired Bush and was disappointed France wasn't supportive of the invasion of Iraq. Kinda like Stephen Harper. You'd think he'd be proud after finding out they lied about Iraq's Weapons of Mass Destruction but no. Sarkozy doesn't care about that. He just wants to be... an oil wars storm trooper just like Stephen Harper does. Sad for both Canada and France. That is not the way it used to be. Je me souviens.