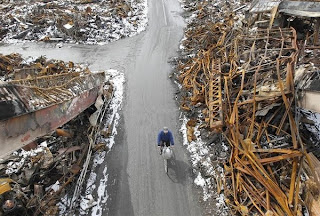 How much does each one of those missiles deployed in Libya cost? Instead of spending tax dollars promoting private companies that profit from war, why not doing something noble and help the rescue efforts in Japan? The Japanese are very noble people. They would prefer to suffer in silence than accept help from outside. Yet the daily death toll rises simply because the number of people still missing is staggering.

Let's think about the earthquake in Haiti. The thought of being buried alive and trapped waiting for rescue is daunting. Many people died in that earthquake. Many were buried for long periods of time then rescued and survived.

The rising death toll in Japan just broke 10,000. Yet there are 17,500 still missing as foreign aid begins to trickle in. We were all outraged to hear that a police officer mishandled a "non emergency" call when a neighbour reported shots fired at Lisa Dudley's house where she lied in her home dying for four days. She was found alive but died of her injuries.

That was a tragedy. They thought of being trapped in her home dying for four days is heart wrenching. How about two weeks? It has been two weeks since the earthquake and Tsunami hot Japan and 17,500 people are still missing. Many of those people are trapped buried under ruble waiting to be rescued. Instead they suffer in silence as we run around spending millions of dollars pretending to be Noble in a conflicted bombing campaign against another oil Barron we have armed and exploited.

Japan has issued a non emergency call for help. Yet it should clearly be treated as an emergency just like the call to the police about Lisa Dudley's shooting. We are doing the same thing we criticize that police officer of doing. We are ignoring the real emergency and are being distracted by other things.

There is nothing laudable or brave about profiting from war and creating manufactured emergencies where we can pretend to be brave and noble. God knows there are enough real emergencies on this planet that need our attention. The rescue mission in Japan is one of them. Think about it. The survivors have no food. One survivor told the media we have no goal. They need a plan they can work towards to rebuild their lives and feed their families. That is something we can help with. 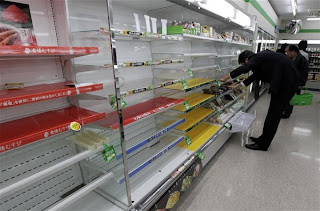 Posted by Dennis Watson at 9:20 AM