A Coalition of the Willing 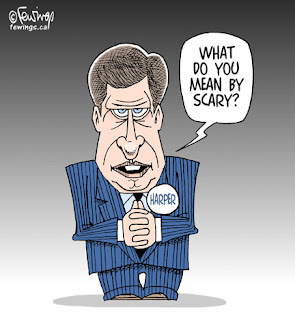 Harper has sure kicked off his election campaign with some pretty bizarre fear mongering. He claims that the evil coalition will seek to upset democracy in Canada. OK so this guy is malicious and an idiot.

Harper never had 50% of the seats. Consequently, he has to team up with one of the other parties or he cannot form the government. Otherwise we keep having elections over and over which is what's happening.

Harper claims that when the other three main political parties team up together, somehow that violates democracy. That is absolute neo con nonsense. Political parties uniting on common ground is a good thing.

The fact that Harper refuses to do so is exactly what's wrong with Canada and his government. The fact that he and Ignatieff refuse work with any other party elected by the people to hold seats in Parliament show they are both power hunger dictators who refuse to listen to any of the other elected seats and insist on "ruling" and "governing" their way all the way with no regard for any one else.