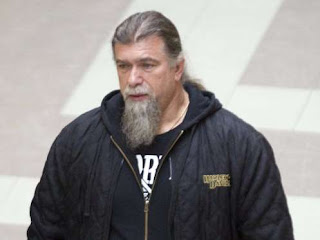 The National Post is reporting that "After a brief lull, blood is being spilled in Montreal’s underworld. A homicide and an attempted murder in recent weeks are raising questions about the turmoil in the Montreal Mafia."

"The Hells (Angels) are restructuring and coming back as strong as they were before the fiasco of Operation SharQc... The Hells rely on small clubs in Montreal and even in the Outaouais region. These little clubs are charged with setting up networks of drug sales and trafficking. They do it under the benediction of the Hells."

"Nino De Bartolomeis was shot March 28. On March 21st A 42-year-old man is shot dead in a parking lot in Terrebonne, north of Montreal. Reports say his name was Yannick Larose had ties to the Hells Angels. March 1st Lorenzo Giordano, 52, a leading member of the Montreal Mafia who may have been in line to leader the organization, is shot dead while sitting in a car in a Laval parking lot."

"Nov. 19, 2015: In a major operation, police arrest the alleged heads of Montreal’s most powerful criminal organizations and declare the Mafia, the Hells Angels and street gangs were working together. Among the 48 people arrested are Leonardo Rizzuto and Stefano Sollecito, described as the heads of the Montreal Mafia. Others charged included: Maurice (Mom) Boucher, the former Hells Angels leader currently serving a life sentence; Salvatore Cazzetta, alleged leader of the Hells Angels; and street-gang leaders Dany Cadet Sprinces and Grégory Woolley."

As we know, Maurice (Mom) Boucher was originally a petty thief and became a member of the Hells Angels after he got out of prison for armed rape. He, along with his associate Biff Hammel, benefited from the Lennoxville Massacre. They both got their patch after the Death Riders betrayal and take over.

Maurice (Mom) Boucher and Salvatore Cazzetta formed a motorcycle club called the SS named after Hitler's troops in Germany. After the Lennoxville Massacre, Bocher seized the opportunity and joined the Hells Angels. Salvatore refused because he thought the Hells Angels killing their own as an act of betrayal and formed the Rock Machine. during the years of war between the Has and the RM, Boucher and Salvatore remained friends. It was even rumored that Boucher had Salvatore murder some of his political rivals within the Hells Angels. As crazy as that may seem, when Boucher finally went to prison Salvatore and the rest of the founding RM members crossed over and joined the HAs. Salvatore became president of the Montreal chapter.

Greg Wooley was of course an associate of Mom Boucher. They made Greg a member of the Rockers (Not Rock Machine) which another puppet club that sold drugs for the Hells Angels. Greg in turned formed the Syndicate and helped the Hells supply all the Crips in Montreal with drugs. Greg tried to untied the Crips and the Bloods in Montreal and have them all sell drugs for the Hells Angels. When Chenier Dupuy, leader of a north Montreal street gang called Beau-Gars said no, he was shot dead August 2012.