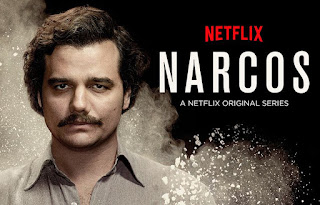 Narcos is an interesting TV series on Netflix that is about Pablo Escobar in Colombia. It shows a glimpse of the rivalry between the DEA and the CIA but it also introduced CIA drug smuggler Barry Seal who was a drug kingpin tied to both the Clintons and the Bush family working out of Mena Arkansas. They showed how George Bush Senior spun the Barry Seal story and convinced Reagan Barry Seal was working for the Sandinistas when in reality he was working for the CIA and the Contras. Reagan wasn't the bad guy, his advisor George Bush Senior was. 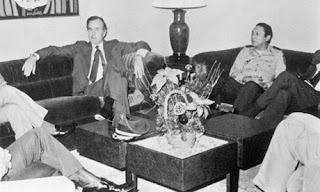 The Guardian ran an interesting article comparing Saddam Hussein with Manuel Noriega. It claims they both had US support until they went rogue and had to be overthrown. Gag. They got it half right. They enjoyed US support until they got screwed over. The CIA put Saddam Hussein in power. They sold him chemical weapons to use on Iran to oppose a potential Communist threat. They also sold Iran arms at the same time to raise money for the Contra rebels in Nicaragua.

Manuel Noriega was also on the CIA payroll. Colonel Edward P. Cutolo explained what Operation Watchtower was all about. Cutolo claimed there were a series of three electronic beacon towers beginning outside of Bogata, Colombia, and running northeast to the border of Panama. With the beacons in place and activated, aircraft could fix on their signal and fly undetected from Bogata to Panama, landing at Albrook Air Station.

Cutolo testified that the cargo flown from Colombia into Panama was cocaine. Cutolo claimed during the Feb., 1976, Watch Tower Mission, 30 high performance aircraft landed safely at Albrook Air Station where the planes were met by Col. Tony Noriega, a Panama Defence Force Officer assigned to the Customs and Intelligence Section. Also present at most of the arrivals was CIA Agent Edwin Wilson. Noriega was drug traficking for the CIA before they made him president. Pablo Escobar's connection to the CIA was found in Peru.

Judge Bonner claimed that the CIA brought a ton of cocaine on a jet into Miami when he was the head of the DEA. The CIA adamantly denied it until he went on 60 minutes November 1993 and documented everything. Then they finally admitted it was true but insisted that was the only time and it was a mistake. It was suppose to be a sting operation even though they made no attempt to track the cocaine or arrest anyone involved in supplying it.

In 2013 the CIA were caught bringing a single shipment of 24 tons of cocaine into Miami on a US Air force jet from Costa Rica. This time they didn't claim it was part of a sting operation. This time they claimed the cocaine was slated for destruction. I kid you not. Why on earth would they bring it to Miami of all places, cocaine central, to be “destroyed.” It just doesn't make sense.

Operation Fast and Furious showed that the CIA did indeed learn their lesson form the Judge Bonner story. The only way to get around the DEA was to infiltrate it. Operation Fast and Furious shows us that Iran Contra never stopped. The CIA are the biggest cocaine traffickers on the planet. The question is, if the CIA can lie about their persistent drug trafficking since Vietnam, what else are they capable of and willing to lie about? Almost anything really.

Dont get me wrong. Communism is bad. There is no such thing as Democratic Socialism in the Communist Manifesto. I'm just saying the end doesn't justify the means and that the CIA are just as bad as the Communists. In fact, some would say they are in reality on the same side.