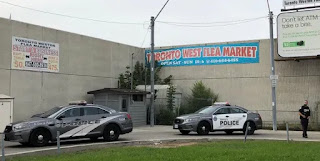 CBC is reporting that "Toronto police say they have arrested a 16-year-old boy after a 65-year-old man was shot to death at the Toronto West Flea Market. Police identified the victim as flea market employee Rocco Scavetta. He died at the scene."

The Toronto Star is reporting that "Toronto police have arrested a teenager after a man was shot and killed as he tried to stop an attempted robbery at a Toronto flea market Saturday afternoon. Rocco Scavetta, 65, was identified as the victim by Toronto homicide Det. Michelle Campbell late Saturday night. She said he worked at the market. Witnesses said Scavetta was trying to stop a robbery at the time of the shooting, which sent shoppers running out of the crowded area at Old Weston Rd. and St. Clair Ave. W. Scavetta was shot around 3:30 p.m., police said. Paramedics pronounced him dead at the scene minutes later."

With an name like Rocco Scavetta, one has to wonder if he had affiliations or if it was indeed simply someone trying to stop a robbery. What is a kid going to steal from a flea market? Back in the US crack epidemic, the gangs would hire young offenders to commit crimes because the prison sentences for young offenders were far less than they were for adults.