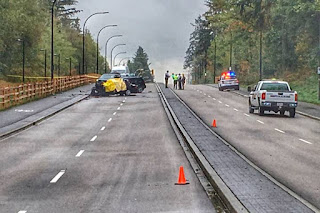 Global is reporting that "One person is dead after a serious crash in Surrey on Saturday morning. Surrey RCMP Staff Sgt. Duane Honeyman said officers were called just after 8 a.m. to reports of a vehicle on fire on 100th Avenue. Crews arrived to find a two vehicle collision, with both vehicles burning. The driver of one vehicle was rushed to hospital, where he is in critical but stable condition. The driver of the second vehicle was pronounced dead at the scene. Honeyman said it’s unclear how the two vehicles ended up colliding, with a median separating traffic travelling in each direction. 'Our traffic services along with our collision investigative team are trying to figure out which vehicle crossed over or exactly what happened prior to the collision itself,' he said."

That the first question I had. How was it a head on collision when there is an island separating trafic. Someone either jumped the meridian or was driving down the wrong side of the street.