Alberta is cracking down on the Hells Angels and BC isn't 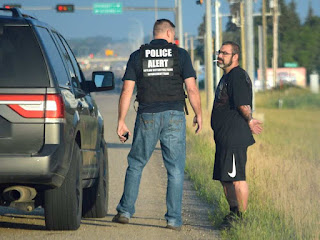 The Edmonton journal is reporting How Alberta is cracking down on the Hells Angels and the outlaw biker gangs that support them. "Disrupting and dismantling outlaw biker gangs and organized crime in Alberta was one of the founding principles of ALERT when it formed in 2006. And operations like Project Entry are part of the sledgehammer they use against serious crime. It is the approach ALERT chief executive officer Supt. Chad Coles said is necessary. “You have to maintain the course and not take the foot off the gas,” he told Postmedia in January. “To really see results you can’t just make one arrest and say that we are done.”

Unfortunately, that is exactly what the BC Gang Task force did. After the 2012 Kelowna Summer Jam that saw David Giles and Johnny Newcome busted they stopped going after HAs that sell drugs and only went after HA drug dealing rivals. They think helping the Hells Angels maintain a monopoly on the drug trade makes their life easier with less pubic violence. Tell that to Janice Shore and Ashley Machiskinic. Letting anyone have a monoploly on the drug trade is never a good idea. That is why we need a Mollen Commission in BC jut like New York had.

Bringing back the Outlaw Motorcycle Gang Unit in BC