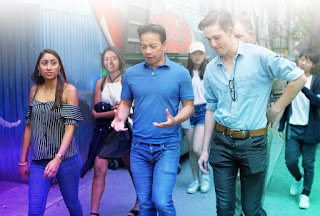 Tragically, Ian Campbell, the Hereditary Chief from Squamish First Nation has withdrawn his candidacy for mayor of Vancouver. Vision Vancouver is left with no vision. Even though Mayor Moonbeam was an idiot, I would have endorsed Ian Campbell not the party. Now that he has withdrawn the choice is clear. Green Justice endorses Ken Sim and the NPA.

The Tyee is reporting that "Ken Sim Could be Vancouver’s First Chinese-Canadian Mayor. NPA candidate has heavyweight backing, community support and an uncertain field of competitors."

We've once again come full circle. Politics in BC is tidal. It's a jump to the left, then a step to the right. Let's do the Time Warp Again. Ya see in politics, power tends to corrupt and absolute power corrupts absolutely. Mayor Moonbeam was an idiot. He was not fiscally responsible. His spending was out of control. Years ago I remember debating with a NPA candidate at First United in the DTES during the Woodward's Squat. They were kicking the homeless out from under bridges and stealing their possession. That was extreme. Sadly we have gone to the other extreme. Harm Reduction has become Harm Promotion and drug overdoses are at record levels.

Although Ken Sim's nationality is not relevant, it would be nice to elect a Chinese mayor for once. Only he's not Chinese, he's Canadian. He was born and raised in Vancouver just like I was. His parents were immigrants. Hard working immigrants.

My daughter's husband is an immigrant. When my daughter told him we only work 40 hours a week in Canada he said only 40 hours? I can get two jobs then. She said no, you're OK. We'll be fine. Immigrants have work ethic. Millennials don't. Yeah I just went there. Immigrants are what makes America great. Unless we're First Nations, we are all immigrants in Canada.

Posted by Dennis Watson at 6:46 AM