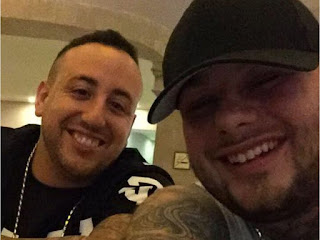 The Montreal Gazette is reporting that Denis Desputeaux, 24, was sentenced to a 28-month prison term in Quebec for trafficking in cocaine and crystal meth.

"Desputeaux was in Dominican Republic on April 24 when members of the Escouade nationale de répression contre le crime organisé (ENRCO) spread out across Quebec to make arrests in Project Objection, an investigation into drug trafficking networks tied to the biker gang. The arrests began at 5:30 a.m. A little more than more than an hour later, a photo of a police officer dressed in riot gear with a bullet wound to his face was posted on Desputeaux’s Facebook page. The photo was accompanied with a comment “Talk to the police in a language they understand.”"

That wasn't very bright. That was a public threat. Now he has to privide a DNA sample. That's a natural consequence. Another Hells Angels drug dealer selling cocaine and crystal meth.