Evidently there is yet another facebook group that opposes Tom Gill and the LRT in Surrey called United for Change Surrey. They have posted a video on their facebook group claiming Tom Gill is in a conflict of interest over the LRT in Surrey. Aren't they all? The Surrey LRT is tied to the SNC-Lavalin Fraud. Now we have Green Justice, Sky Train for Surrey and United for Change Surrey who all oppose the LRT over skytrain. We are all indeed united for change in Surrey.

United for Change Surrey makes a good point. John Horgan and the BC NDP rightfully cancelled the George Massey Tunnel Replacement Fraud after contracts had already been signed by the previous government. There is absolutely no reason whatsoever the Surrey LRT can't be stopped and replaced with Skytrain. People who drive cars prefer Skytrain because Skytrain does not impede traffic. Putting a road through Hjorth Road Elementary is just plain wrong. 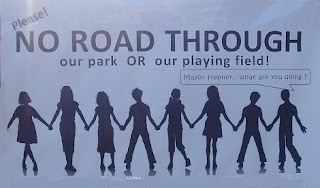 Give it up for Daryl Dela Cruz