Why we left Surrey First 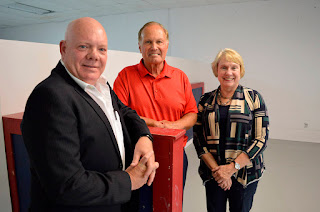 The Peace Arch News / Surrey Now - Leader is reporting an "exclusive" interview why three of the Surrey First counselors jumped ship. Let's start with Bruce. "Hayne was the first to step off after what he described as a real shift, operationally and philosophically from when Dianne (Watts) was mayor.” Sadly, Bruce isn't being completely honest here.

It is true Linda Hepner's popularity has nosedived due to her arrogant defiance over Hawthrone Park and the LRT plowing a road right through Hjorth Road elementary. That part is true. Tom Gill's popularity is nonexistent especially after he started sharing private text messages with the media. Here's the crutch: Dianne Watts, Linda Hepner and Tom Gill are all connected at the hip.

Surrey First isn't a political party like most others. It is a non profit (yeah right) society run by Dianne Watts and a handful of people she controls. Dianne Watts chose Linda Hepner and Dianne Watts chose Tom Gill over Bruce Hayne. That is a fact. There has been no policy change because Dianne Watts was the author of the original fraud back in Campbell Heights.

Twenty-year Councillor Barbara Steele has been at the root of the problem. From Campbell Heights to the money laundering remix at the Mega Casino, Barbara Steel was there in the front lines defying the public interest every step of the way. Even when Dianne Watts choked at the overwhelming opposition to the Casino Gate on rural land flip, Barbara Steel defiantly drove her new car right over the public will to satisfy her own interests.

Think about it. Rich Coleman is Satan incarnate. Barbara Steele was considering running with him until he decided not to run. That shows you what kind of a person she really is. There isn't a fiber of integrity in her entire body. Her history clearly shows that.

Bruce Haynes didn't support the Casino Fraud Flip but he did support the road through Hawthorne Park. That means the residents don't trust him. Dave Woods left when Tom Gill started rambling about more gun control. That was a wise decision. Tom Gill is a complete idiot. That's why he was chosen to be Dianne Milan's puppet on a string. However, the article states Dave Woods is tormented by his decision to leave Surrey First. Truth be told, the only thing that is tormenting him about it is the fear that he won't get reelected without them. Don't lose any sleep over it. It was a no win situation. Damned if you do, damned if you don't. Just ask Judy.

This is why Green Justice supports Doug McCallum for mayor of Surrey. His crime prevention competence is tried tested and proven. There is no argument about that. It's time to Wake up.