I am thrilled to hear of Curtis Sliwa's bid to run for mayor of New York. The republican party would be wise to embrace him. I had no idea how much of a complete idiot Bill de Blasio is. He supported the Communist paramilitaries in Nicaragua. He was on the wrong side of that war.

We can now see what de Blasio's failed policies has done to New York. He has destroyed the New York crime reduction model and has brought back, crime, drugs and poverty. As a result, people are leaving New York in droves. Curtis is from New York. Bilbo Baggins is not.

De Blasio, aka Warren Wilhelm, is trying to turn New York City into another Venezuela. It is time to resurrect the New York model and the political will that made it all possible.

After Curtis' highly publicized divorce with Mary Sliwa he told the New York Post “The only skeleton I have left is the one under my skin.” I saw pieces of that cat fight over Curtis. Curtis has remarried and so has Mary. To a Democrat. That's all that needs to be said. That chapter is closed and a new one has begun. New York is falling apart. Who can save it? Curtis Sliwa can.

This was back in the /80's during the US crack epidemic. Two gangs were fighting over the right to sell drugs on a specific street corner during specific hours. A little girl was cut in half from machine gun cross fire. It was horrendous. Curtis lead a protest with a mock coffin. He wrote the little girl's name on the sidewalk where she was killed with the words Never Again.

Tut said the first night their headquarters had bricks thrown through every window. The locals told them go back to New York where it's safe. That's not something you tell a New Yorker. They rose to the challenge, kicked ass and did the impossible. They rid that neighborhood of crack dealers and all their trickle down violence. They say the true test of leadership is the ability to train leaders. Tut and Paul were exemplary. Curtis Sliwa has trained fearless leaders and influenced lives all around the world.

Lisa Campos was a pillar in Portland while Joe big Bear in Minneapolis was profound. Under Curtis' leadership Sebastian Metz opened chapters in Australia, England and Berlin. The organization had a huge presence in Japan. Sebastian came back from the dead after being in a coma and had to relearn how to walk and talk. That's why they call him Iron. After many of us had moved on, Third Rail rose up and gave many years of dedicated service. Some trolls might say yeah well you don't know everything that happened. I saw enough and I know a lot more about what happened than you think I know.

I spoke with Wing Chun. I asked him why he picked that for a street name. We all know Wing Chun was the martial art Grand master Yip Man taught Bruce Lee. I studied a bit of Wing Chun in Kirk Jacque's version of Jeet Kune Do. Wing Chun was the name of the original founder of that martial art. She was a girl. I asked him why he chose a girls name for a street name. I certainly didn't have any problem with it. I just thought if he actually had studied Wing Chun he would have known that. You want to talk about Curtis' past history? Lets do that.

I went to New York in 1985. Curtis founded the organization back in 1979. By the time I got there thing were well established. The Harlem headquarters was wallpapered with old news articles. I read many of them and heard many first hand experiences from Tut, Fox and the others.

We all know about how the Magnificent Thirteen set the stage to confront crime on the subway but do we know what Curtis did before that? He started the Rock Brigade. Curtis' street name was the Rock. Curtis organized a bunch of youth to pick up garbage and got them all excited about doing it. I kid you not. Curtis has been involved with volunteer work all his life. Not just one or two years. His entire life. Back in the day every penny he made went back into the organization. That's the kind of person he is. Curtis didn't spend his life trying to kill democracy in Nicaragua. He spent his life defending law and order here at home. Law and order leads to light and hope. Lawlessness leads to darkness and despair. New York is a tale of two cities.

The powers that be kept threatening to sue Curtis and made him read out a public apology. As soon as he read it out, he tore up the apology on camera and said if you believe that. you're crazy. This was cold blooded murder and the Guardian Angels will not stop until we see justice for Frankie Melvin and his family. Curtis didn't riot or loot. He had self respect. He wanted justice not mayhem. That's why we all did what we did. We knew Curtis had our backs.

So who are you going to get to save New York? He did it before and he'll do it again if the millennial New Yorkers can grow a pair and embrace their heritage. If they can resurrect the political will that saved New York the last time we can do it again. Word. Kill Bill yo. 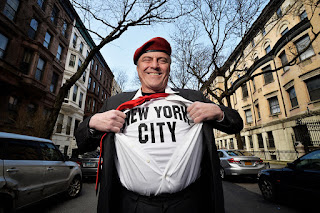